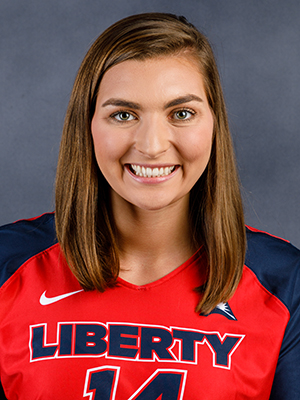 2018 (R-Fr.)
• Competed in 45 sets over a span of 16 matches played, starting 10 times at middle blocker
• Scored 65 kills (1.44 kps) at a .303 pace, adding 40 blocks (0.89 bps)
• Recorded two double-digit kill matches, and four contests with five or more blocks
• Became the first Liberty player in the rally-scoring era to record five or more blocks in each of the first two matches of a season
• Scored a career-high 11 kills and added seven blocks against Oakland (Aug. 24)
• Tied her career high with 11 kills (.556) versus Colgate (Sept. 8)
• Hit .500 with nine kills while also recording six blocks at NJIT (Sept. 30)
• Totaled eight kills and a career-high 10 blocks against Lipscomb (Oct. 5)
• Her 10 blocks against Lipscomb were the most by a Lady Flame since the 2013 season and the most by a Liberty freshman in a match in rally-scoring era
• Named to ASUN Honor Roll

Prep
• Home schooled, competed for Durham Flight Homeschool as a four-year starter
• Three-time Eastern Regional All-Conference team selection
• 2015 Eastern Conference Offensive Player of the Year
• Named to all-star team and all-tournament team as a junior
• Invited to represent North Carolina in the 2016 Down Under Games in Australia
• Competed for Triangle Black squad in club volleyball

Personal
• Daughter of Kathy Macy
• Majoring in nursing, with the goal of becoming a pediatric nurse
• Birthday is Nov. 9