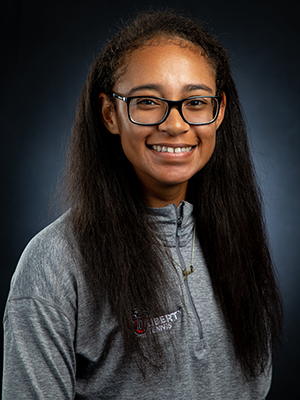 2018-19 (Jr.)
• Earned unanimous selection to ASUN All-Conference first team
• Honored on VaSID All-State singles first team, becoming just the second player in program history to achieve the feat
• Earned program's first-ever ASUN Women's Tennis Player of the Week honor on March 20
• Ended year ranked No. 14 in the Atlantic Region in singles
• Claimed 24 singles matches (16 spring, eight fall), which was tied for the fifth most singles wins in a season in school history
• Posted a perfect 15-0 record in the No. 2 singles slot and won her last 14 matches to close out the season
• Had a 24-5 singles record for a .828 winning percentage, the fourth best mark in program history
• Went a perfect 7-0 in ASUN regular season matches
• Captured 17 total doubles matches on the year, 10 in the spring and seven in the fall
• Had a 8-2 No. 2 doubles record in the spring alongside partner Grace Hashiguchi
• Posted a 4-1 record in ASUN doubles matches

Prep
• Finished her junior career in 2016 as a Blue Chip and was ranked as high as No. 17 in the country
• Won tournament matches against: No. 5 Salma Ewing (signed with USC), No. 7 Victoria Flores (signed with Georgia Tech), No. 13 Hannah Zhao (signed with Duke) and No. 15 Christie Wan (signed with Columbia)
• Qualified for finals at the Cal State Northridge ITA
• Claimed the Claremont-Mudd Scripps College ITA title
• Reached the finals at the ITF Spring National Championships in 2014