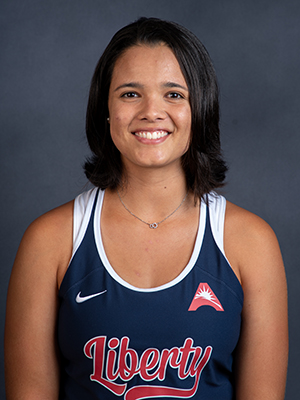 • Voted to Big South First Team All-Conference Singles listing
• Selected to First Team All-Conference Doubles listing alongside partner Maria Medina
• Garnered inclusion on the VaSID University Division All-State Doubles first team with Medina, one of three doubles teams in the state of Virginia to earn the recognition and the fourth-ever Liberty pairing to receive the honor
• Named to Big South Presidential Honor Roll
• Finished with 20 singles victories on the year, including 18 wins in the spring
• Had an 18-3 spring singles record for the third-best singles winning percentage (.857) in the Big South among all players
• Posted a 13-1 record as Liberty's No. 3 singles player for the best winning percentage (.929) in the Big South
• Closed the season by winning her final 11 singles matches (March 15-April 21) and 18 of her last 19 matches
• Posted 21 doubles wins on the season, with 18 coming in the spring, all with Medina
• Recorded an 18-5 record in spring doubles matches with Medina, including a 17-5 mark in the No. 2 spot in the lineup for the best Big South No. 2 doubles winning percentage (.773)
• Closed the year by winning the last nine doubles matches, spanning March 31-April 21

Previous School
• Played for two years at NCAA DII Southwest Baptist in Missouri
• Guided the Bearcats to a final team ranking of No. 22 in the Oracle/ITA Division II Women's National Team Rankings as a sophomore
• Led Southwest Baptist to a No. 12 national ranking as a first-year player
• Posted 22-0 record in singles as a freshman at No. 1-3 singles
• Recorded 25-2 record in doubles during freshman campaign

Prep
• Graduate of Colegio Juscelino Kubitschek
• Ranked as high as No. 633 on the ITF World Junior circuit
• Won a doubles title and ITF Itajai and was a finalist in doubles at ITF Guatemala as a junior
• Captured singles and doubles titles at Cosat Argentina as a sophomore
• Reached finals in singles at Banana Bowl and semifinals at Cosat Bolivia as a freshman