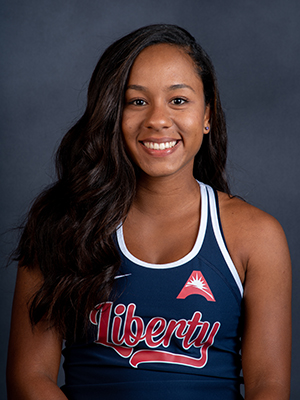 2017-18 (Jr.)
• Voted to Big South First Team All-Conference Singles listing
• Selected to First Team All-Conference Doubles listing alongside partner Lara Soares
• Garnered inclusion on the VaSID University Division All-State Doubles first team with Soares, one of three doubles teams in the state of Virginia to earn the recognition and the fourth-ever Liberty pairing to receive the honor
• Finished third on the team with 21 singles victories, including 14 in the spring
• Posted a 10-4 mark and .714 winning percentage in the No. 2 spot in Liberty's lineup, the second-best No. 2 singles winning percentage in the Big South, and went 6-2 in Big South singles matches
• Won the first five singles matches of her Lady Flames career and also held a six-match winning streak in the spring from March 31-April 12
• Posted 23 doubles wins on the season, with 18 coming in the spring, all with Soares
• Recorded impressive 18-5 record in spring doubles matches with Soares, including a 17-5 mark in the No. 2 spot in the lineup for the best Big South No. 2 doubles winning percentage (.773)
• Closed the year by winning the last nine doubles matches, spanning March 31-April 21

Prep
• Graduate of U.E. Colegio "Padre Alcala" and U.E.T.D. Liceo Caracas
• Ranked as high as No. 862 in singles on the Women's Tennis Association (WTA) pro tour before attending State College