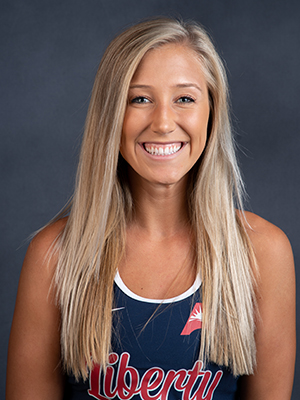 2017-18 (Jr.)
• Garnered inclusion on the Big South Second Team All-Conference singles team for a second straight season
• Named to Big South Presidential Honor Roll
• Claimed 16 singles match on the season, 13 of which came in the spring
• Posted a Big South-best 8-1 (.889) mark in the No. 6 singles slot and also played matches in the No. 2 (1-1 record), No. 3 (2-1 record), No. 4 (1-3 record) and No. 5 (1-0) positions in the lineup
• Posted a perfect 6-0 mark in conference singles bouts
• Won eight straight matches, spanning from March 24-April 20, seven of which came in straight sets
• Recorded triumphs in each of her first three matches (all in straight sets) of the fall season at the season-opening South Carolina Invitational (Sept. 15-17)
• Totaled 14 doubles victories, 11 of which came with partner Evangeline Crist
• Served as Crist's partner when Crist broke the program with her 91st doubles win, a 6-1 triumph over Longwood's Marija Venta and Kaori Terunuma (April 3)
• Paired with Crist to reach the doubles main draw quarterfinals at the ITA Atlantic Regional at Virginia Tech in the fall, the first time in program history that two Liberty doubles duos reached the quarterfinals in the same year (Ashley Bongart/Rebekah Anderson also advanced)
• Finished junior season eighth all-time in program history for career doubles wins (59) and eighth in doubles winning percentage (.648, 59-32)

2016-17 (So.)
• Selected to Big South Second Team All-Conference singles squad
• Tabbed to VaSID All-State Doubles first team with partner Evangeline Crist
• Led the squad with 20 doubles victories
• Paired with Crist to become the first Liberty women's tennis duo in program history to qualify for the semifinals at the ITA Atlantic Regional in the fall
• Ended the 2016-17 season as the No. 7 doubles tandem with Crist in the Oracle/ITA Division I Regional Rankings for the Atlantic Region
• Invited, alongside Crist, to compete at the 2016 Riviera/ITA Women's All-American Championships, the first time a Lady Flames duo competed at the event
• Captured 16 singles victories overall, including a 14-6 mark in the spring and 9-2 mark in the No. 3 position in the lineup
• Posted a 6-1 mark in Big South singles action in helping the Lady Flames to a share of the Big South regular-season crown for a second consecutive year
• Closed the season by winning her last four singles bouts
• Wrapped up sophomore season with a career winning percentage of .672 (45-22) in doubles, which places fifth best in program history among players with 30 or more career doubles victories.

Prep
• Top-300 player in ITF Junior World Rankings
• Top-100 player and No. 2 tennis prospect in Pennsylvania
• Spent much of the spring in tournaments on the ITF Circuit
• Reached the quarterfinal rounds of the both the Costa Rica Bowl and Panama Bowl