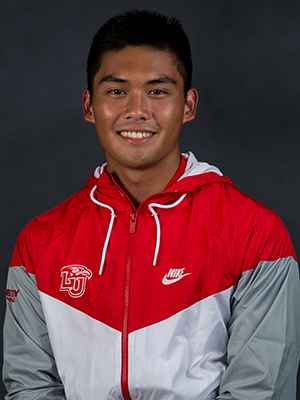 2017-18 (So.)
• Claimed 14 singles matches on the year, 10 in the fall and four in the spring
• Won three matches in a row on two occasions in the fall, including his final three bouts of the fall at the Wake Forest Invitational (Nov. 3-5)
• Took a set from Old Dominion's Adam Moundir at the ITA Atlantic Regional (Oct. 21), the No. 1 overall seed and 35th-ranked player in the country at the time, in the round of 32 in the singles main draw
• Finished with 16 doubles victories, 15 of which came with partner Eddie Gutierrez and 10 of which came in the spring
• Started the spring 8-0 in doubles with Gutierrez, featuring wins over teams from: Virginia Tech, North Carolina A&T, Richmond, Auburn, Kennesaw State, Virginia, New Orleans and Florida A&M
• Placed No. 4 in the Big South in No. 2 doubles winning percentage (.667, 8-4 record)
• Posted a team-best six doubles triumphs in the fall with Gutierrez

2016-17 (Fr.)
• Named Big South Freshman of the Week on March 22
• Named to Big South Presidential Honor Roll
• Captured a title at B1 singles at the Wake Forest Invitational in the fall
• Finished second on the squad in singles victories (16) and tied for second in doubles victories (12)
• Posted an 8-4 singles record in fall tournament play
• Played with four different doubles partners during the year, finding the most success with Diego Castano (4-3 record)
• Held a 5-5 record in the No. 3 slot in the lineup during his first spring campaign
• Strung together three straight singles victories from March 9-13, including wins over opponents from Campbell (Dustin Werner), Valparaiso (Charlie Emhardt) and Farleigh Dickinson (Danilo Vukotic)