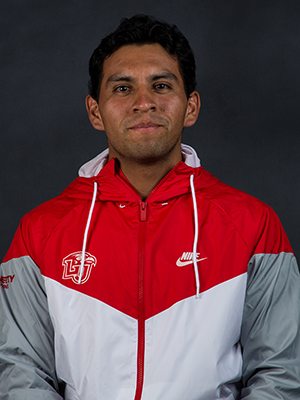 2017-18 (Jr.)
• Selected as Big South Men's Tennis Player of the Week on Feb. 14
• Tabbed 2018 ITA Scholar-Athlete after maintaining a perfect 4.0 GPA throughout the academic year
• Named to Big South Presidential Honor Roll
• Finished tied for first on the squad with 23 singles victories, 13 of which came in the spring
• Posted a 5-2 mark in the No. 3 slot in the lineup and 8-8 record at No. 2 singles
• Tied for the team lead with 10 fall singles wins and reached two singles finals (Liberty University Invitational, Aztec Fall Invitational)
• Prevailed in eight three-set matches on the year, including four straight from Feb. 23-March 2
• Claimed 15 doubles matches on the year, all with partner Vince Salas
• Started the spring 8-0 in doubles with Salas, featuring wins over teams from: Virginia Tech, North Carolina A&T, Richmond, Auburn, Kennesaw State, Virginia, New Orleans and Florida A&M.
• Placed No. 4 in the Big South in No. 2 doubles winning percentage (.667, 8-4 record)
• Posted a team-best six doubles triumphs in the fall with Salas
• Finished junior season ranked No. 9 in program history for career singles wins (54)

2016-17 (So.)
• Captured a title in the Black doubles flight at the season-opening USC Upstate Fall Classic
• Finished tied for second on the squad with 12 doubles victories, eight of which came in the spring
• Won three straight doubles matches on the Flames' spring break trip in Orlando, Fla. from March 13-15
• Placed fourth on the Flames with 13 singles triumphs, including nine in the spring season
• Scored victories in his first four spring singles matches
• Posted a 4-1 mark in the No. 2 position in the Liberty lineup and 3-3 record at No. 3