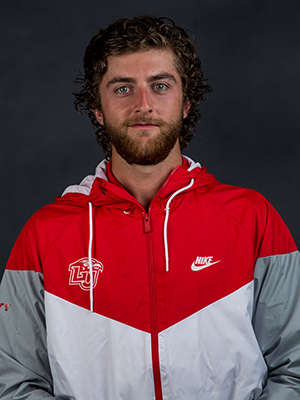 2017-18 (So.)
• Named to Big South Conference Second Team All-Conference singles list
• Tabbed 2018 ITA Scholar Athlete after posting a 4.0 GPA in both fall and spring semesters
• Garnered inclusion on the Big South Presidential Honor Roll
• Served as the team captain for the season
• Finished tied for first on the squad with 23 singles victories, 15 of which came in the spring
• Reached the quarterfinals of the singles main draw of the ITA Atlantic Regional after winning four matches
• Went 11-5 at No. 3 singles and 6-1 in Big South singles bouts
• Closed the year on a seven-match winning streak, spanning from March 17-April 16
• Tallied 16 doubles victories on the year, tied for the third most on the team
• Notched 10 doubles triumphs in the spring, posting a 6-1 mark with partner Sam Matheson in Big South doubles matches
• Won 41 singles matches over the past two seasons, the most of any Flames men's tennis player in that span

2016-17 (Fr.)
• Named to Big South Conference First Team All-Conference singles list
• Selected to the VaSID All-State Men's Tennis singles second team, the first Flames freshman in program history to garner the distinction
• Chosen as the Big South Freshman of the Week in back-to-back weeks (Feb. 2, Feb. 8)
• Tabbed 2017 ITA Scholar-Athlete
• Named to Big South Presidential Honor Roll
• Became the first Flame since Shea Thomas in 2013 to advance to the round of 16 in the singles main draw at the ITA Atlantic Regional
• Led the squad with 18 singles victories, 13 of which came during the spring
• Went 8-3 at No. 1 singles (fourth in Big South) and 5-2 in Big South singles competition
• Recorded three straight singles triumphs four times
• Closed the year by winning eight of his last 11 singles bouts
• Collected 12 doubles victories to finish tied for the second on the team in the category
• Posted a 10-7 mark in spring doubles matches and 5-2 mark against Big South foes
• Represented the Liberty men's tennis program at the ITF USA F29 Futures tournament during the fall