The newly renovated Vines Center court features a two-tone look, fresh paint, enlarged lettering along the baselines, a single three-point arc on opposite ends and charge arcs underneath each basket.

Renovations to the Vines Center basketball court were completed this week, giving it a fresh new look heading into the 2011-12 season.

Flames fans enjoying men's and women's hoops action inside the facility this year will immediately take notice of the court's two-tone appearance. The baseline and sidelines have also been repainted from blue to red, while the floor's lanes are now coated in blue.

Recently, the NCAA ruled to adjust the women's three-point arc to the men's standard of 20 feet, nine inches. In compliance with the recent ruling, the court now features one three-point line on both ends. The NCAA also passed a statute that prohibits defenders from drawing a charge within three feet of the basket. As a result, charge arcs or no-charge zones have also been added to the floor.

This past season, the Flames garnered a 19-13 record, finishing second in the Big South regular season standings. Concluding league play with a 13-5 mark, head coach Dale Layer's team set a new program record for most conference wins in a season.

The Lady Flames closed out the 2010-11 campaign at 22-11, capturing their 12th Big South Conference regular-season title and making their first-ever Postseason WNIT appearance. 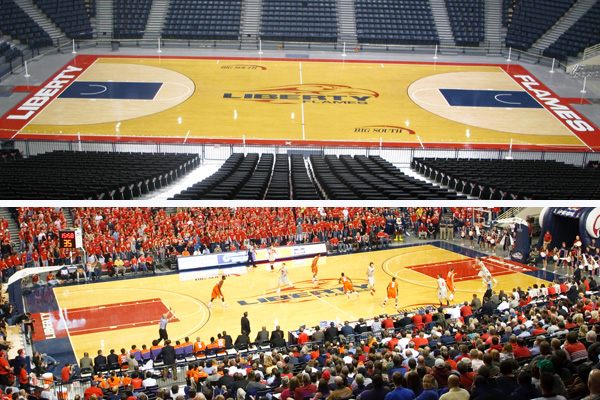 A look at the newly renovated Vines Center floor (top) and the court's previous design (bottom).