The Liberty men's squad, which has won every Big South indoor meet ever contested, tallied 192 points. The Flames finished 70 points ahead of runner-up Charleston Southern.

On the women's side, the Lady Flames halted Coastal Carolina's four-year run of Big South indoor crowns. Liberty racked up 182.5 points, defeating the Chanticleers by 37.5 markers. 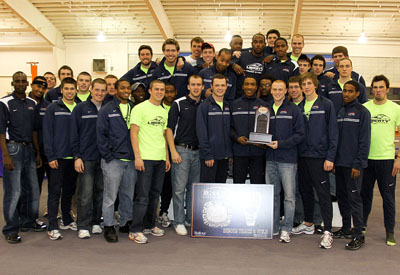 Reddington added a sixth-place finish in the triple jump, reaching 45-0.25 on his sixth and final attempt. He also notched third place in the long
jump at the meet.

Edmonds is a senior criminal justice major with a 3.75 grade-point average. He took runner-up honors in his only event of the meet, the 5K, after clocking a 14:27.20. This is the third time he has been a Big South All-Academic team honoree in his career, including the 2007 and 2008 cross country campaigns.

Sam Chelanga (R-Jr., Nairobi, Kenya) was victorious in all three of his races on the weekend, capped off by a mile title on Sunday. He successfully defended his championship from 2009 with a time of 4:13.75. Liberty has now won the men's mile six years in a row at the Big South indoor meet.

Also making a successful defense of his 2009 title was Geren Woodbridge (R-Jr., Allentown, Pa.) in the heptathlon. He scored over 5,000 points for the second time this season, outdistancing the runner-up by 133 points with his final tally of 5,016.

Liberty got three more top-three finishes on Sunday, including a pair of runner-up efforts in running events. Jacey Bailey (Jr., Tamarac, Fla.) got out of the blocks well in the 60-meter dash final and took second place in a season-best time of 6.91. Meanwhile, Isaac Wendland (So., Charles City, Iowa) used a blazing last lap to edge defending champion Felix Kitur of VMI for second place in the 800-meter run. His personal-best 1:53.59 clocking ranks the Iowa native as the No. 5 performer in program history.

The Flames then punctuated their victory with a third-place showing in the last race of the evening, the 4 x 400 relay. The quartet of Chris Herbst (R-Jr., Baiting Hollow, N.Y.), Bailey, Taylor Courtney (Fr., Manheim, Pa.) and Andre Washington (Fr., Unionville, Va.) crossed the line in 3:21.01.

Women's Meet Recap
Watson continued an outstanding senior indoor track campaign Sunday with virtuoso performances in the 400 and 800-meter finals, becoming the first runner in meet history to win both events at the same meet. She started the day with a dominating wire-to-wire victory in the 400-meter dash. Watson's winning time of 54.59 set Liberty, Big South and meet records, while provisionally qualifying her for the NCAA Division I Indoor Track & Field Championships.

Classmate Ricksecker ran nearly four miles in two days, finishing her busy weekend with the mile and 800 finals on Sunday. The Delaware native led a 1-2-3 Liberty sweep in the day's first running final, the mile, winning the race in 5:05.79. She then came back to claim fifth place in the 800-meter run in 2:18.84. For the meet, Ricksecker contributed 24 points to the Lady Flames' total.

In the classroom, Ricksecker graduated with a 3.95 GPA in elementary education and is just starting work toward a master's degree in English. She was previously the Big South Women's Scholar-Athlete of the Year in 2008 for cross country. Ricksecker is Liberty's first Women's Scholar-Athlete of the Year in indoor track since Danielle McNaney in 2005.

The Lady Flames accumulated a lot of points and All-Big South honors with second and third-place finishes on Sunday, beginning with the previously-mentioned mile. Jennifer Klugh (So., Centerburg, Ohio) and Hailey Neal (Jr., West Palm Beach, Fla.) joined Ricksecker in helping to set the tone for the remainder of the day's action. Klugh nabbed her second runner-up finish of the meet in a time of 5:07.02, with Neal following closely in third place in 5:08.30.

Rounding out the running events, both Dacia Bushman (Jr., Castalia, Iowa) and Olivia Charnuski (Elmira, Ontario) recorded runner-up efforts on Sunday. Bushman clocked a 17:51.50 for second in the 5K, while Charnuski ended up just 0.01 seconds behind first place with her 8.73 posting in the 60 hurdles.

In the field, Liberty picked up 14 big points in the triple jump, thanks to Alyssa Pegues' (So., Warner Robins, Ga.) second-place finish and Mia Aghaji's (R-So., Chester, Va.) third-place showing. Pegues reached 38-8.25 on her best attempt, while Aghaji, triple jumping for the first time this season pulled out a 38-6 on her final hop, skip and jump.

The Lady Flames then scored 9.5 more points in the most competitive pole vault this meet has seen in recent years. Four vaulters cleared 11-5.75, including Shelley Parker (Fr., Lynchburg, Va.), who tied for third place on misses. Rachel Houseknecht (Jr., Hughesville, Pa.) became the No. 5 performer in program history with an indoor personal-best 10-11.75 for sixth, while Erin Hudson (Sr., Whitacre, Va.) matched her personal best at 10-6, taking the eighth spot.

Liberty will send a sizable contingent of athletes to Boston, Mass., Saturday and Sunday, for the IC4A and ECAC Division I Indoor Track & Field Championships. The men's IC4A meet will be held at the Boston University Track & Field Pavilion, beginning Saturday at 11 a.m. with the heptathlon 55-meter dash. Across town at the Reggie Lewis Track and Athletic Center, the women's ECAC meet will get underway Saturday at 9 a.m., when the gun goes off for the pentathlon 60-meter hurdles.