"In my first year at Liberty, I have had the opportunity to hear the reputations of our former players," said Liberty head men's basketball coach Ritchie McKay. "Many individuals have spoken volumes to me on the tremendous ability Peter showed during his career at Liberty. Not only have I heard about his athletic prowess and desire to win on the court, but also the character with which he operated off the court." 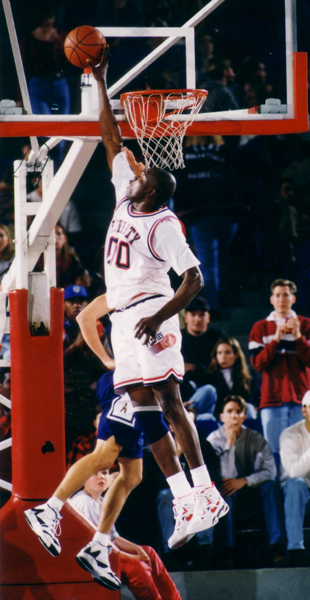 The Lagos, Nigeria native was a first-team all-conference selection in 1996 and 1997, earned second-team honors in 1995 and was named to the league's all-rookie team in 1994. He was named the Big South Tournament MVP twice in his career (1994 and 1997), and was a three-time all-tournament selection.

Aluma, who was a National Association of Basketball Coaches (NABC) All-Region selection in 1997, led the Big South in scoring in 1996 and was the league's top shot blocker in both 1996 (3.9 bpg) and 1997 (3.0 bpg). He also was the 21st player in Big South history with 1,000 career points and 500 career rebounds, and is one of just five players in league annals with 1,700 points and 600 rebounds. During his career, Aluma was also honored as an all-state team selection by both the Richmond Times- Dispatch and the Virginia Sports Information Directors (VaSID) in 1996 and 1997. He still holds the Liberty Division I record for free throws made in a season (159) and career, as well as the school's blocked shot records for a game (eight), season (113) and career.

Aluma is still the Big South's career shot block leader and ranks among the league's top 10 in scoring, field goals, field goal percentage, free throws made, free throw attempts and blocked shots per game. He played professionally with the NBA's Sacramento Kings (1999) and Phoenix Suns (2000), as well as for the Harlem Globetrotters (2001), and overseas for Argentina's Toros De Aragua (1998) and Belarus' Gomel (1999) programs.

"I had the opportunity to speak with Peter myself," commented McKay. "I am very impressed with him and elated that he will represent our program in the hall of fame."

The Hall of Fame was created in 2003 as part of the league's 20th Anniversary celebration, and now totals 35 former Big South Conference student-athletes, coaches, administrators and contributors.