The Liberty Athletics Department, in its continuing effort to update and beautify its facilities, just completed a facelift to the Vines Center floor.

In order to comply with NCAA rule changes for next season, Liberty installed a new three-point line for the men's team. The three-point stripe has been moved back one foot from 19 feet, 9 inches to 20 feet, 9 inches for the 2008-09 season. The men's line is blue, while the women's line remains red.
Other changes to the Vines Center court include the movement of the Big South Conference logo from inside the free throw line to the wings, just to the right of the mid-court line. Previously, the lanes were blue with red trim on each side. Now, they are a solid red which continues through the baseline, breaking up the solid blue baseline. Located in the small red block on the baseline is the lettering "Liberty" in white, outlined in navy blue.

To finalize the facelift, two coats of premium 450 sports poly finish were added to seal the upgrades. A couple additions were made to the Schilling Center practice facility courts as well. In Schilling, the new men's three-point line was added, as well as permanent volleyball court lines for the Lady Flames netters.

Tip-Ins
The stairs in the Vines Center are currently receiving a fresh coat of grey paint to them.

Pictures of the Vines Center floor facelift are below: 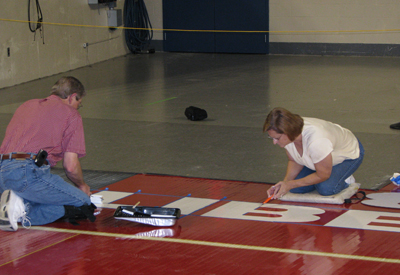 Liberty letters are applied to the baseline. 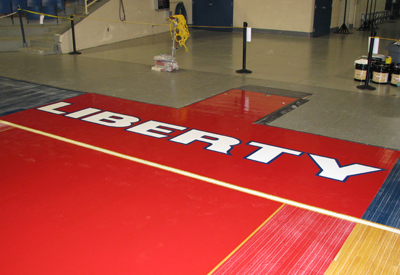 New baseline lettering prior to the final two coats of 450 sports poly finish was added. 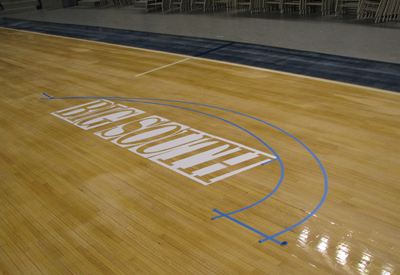 Big South logo is outlined and ready to be painted. 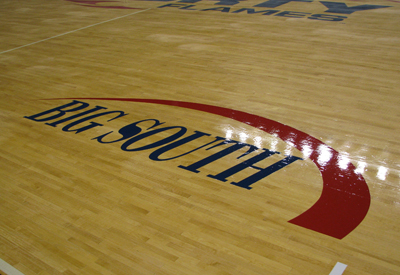 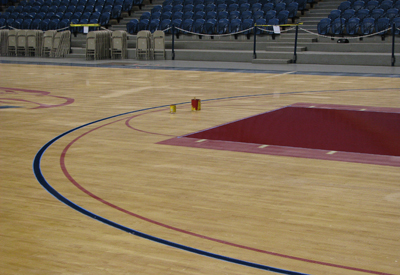 Middle of the facelift process.