McLean and Bannister Honored By VaSID

The Virginia Sports Information Directors (VaSID) announced today its annual University Division All-State Men's Basketball team, and Liberty's Alex McLean and TeeJay Bannister were included on this year's list. Liberty has now placed someone on VaSID's University Division All-State team three-straight times. Larry Blair and David Dees earned second-team honors in 2005, while Blair was named to the first team in 2006, joining Peter Aluma as the only Liberty player to earn all-state honors multiple times. There was no all-state team selected in 2007.

McLean (Senior, Forward, Bay Shore, N.Y.) was named to the first team, adding to his first-team honors on the Big South all-conference squad. McLean ranked second in the conference with 15 double-doubles, No. 7 in points (15.8 ppg), No. 3 in rebounding (8.8 rpg) and No. 2 in field goal percentage (56.0 percent). McLean was one of three players in the league to be ranked in the Top 7 in both scoring and rebounding.

Bannister (Senior, Guard, Jacksonville, Fla.), was named to the honorable mention team, a first in program history. The senior guard finished No. 3 in the nation in assists (7.2 apg), becoming the first Big South player to reach the 200-assist plateau since Campbell's Dan Pogue in 1994. Bannister led the Big South in assists and was second in free throw shooting (82.4 percent). The floor general broke a Vines Center record for assists with 15 against Coastal Carolina and then set a Big South Championship record with 14 assists against VMI. 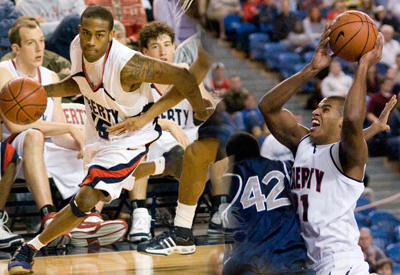 Bannister's friend and former teammate at Virginia, Sean Singletary, took home Player of the Year honors, and was the only player on the all-state team to register votes on every ballot. Virginia Tech head coach Seth Greenberg tallied Coach of the Year honors, while Kevin Anderson of Richmond was named Rookie of the Year. Reggie Williams of VMI was the only other Big South player honored, after he was tabbed on the first team.