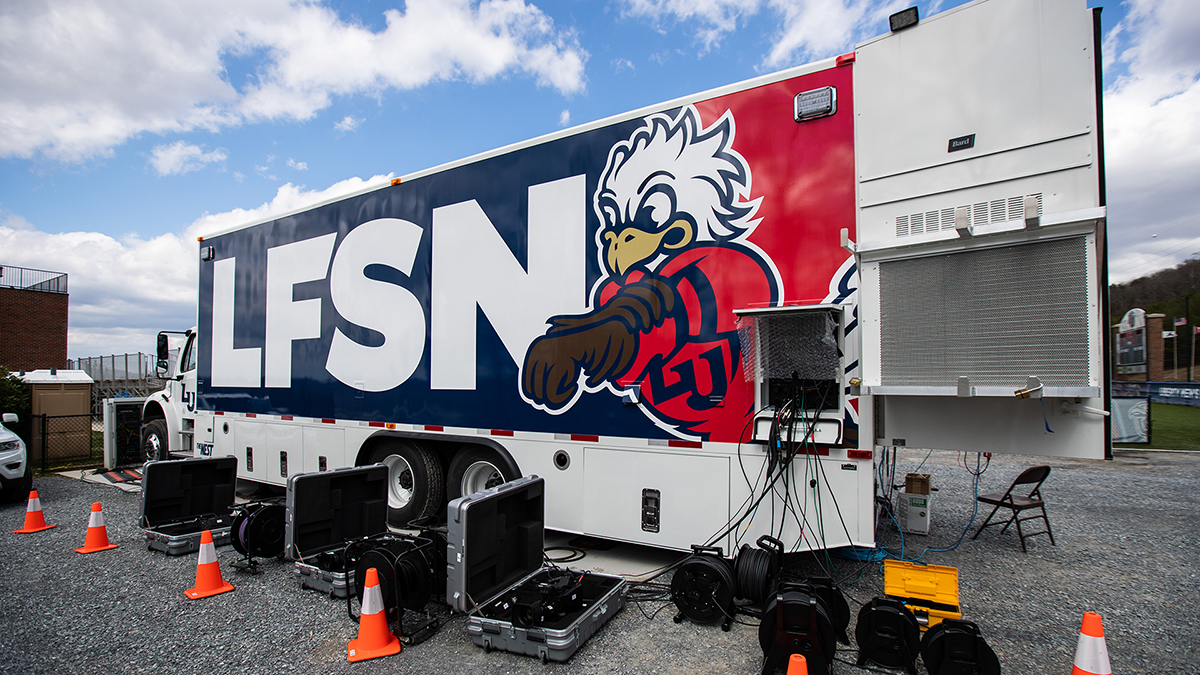 With fewer fans able to watch the Flames compete in person in 2020, the extensive coverage provided by LFSN will be even more important to Flames Nation this season.

With fewer fans able to watch the Flames compete in person in 2020, the extensive coverage provided by the Liberty Flames Sports Network will be even more important to Flames Nation this season.

From a TV broadcast standpoint, Liberty's five home football games are slated to be streamed on ESPN3 (subject to change), providing free coverage of Flames Football to those who already have a proper cable or satellite subscription.

Matt Warner (play-by-play) and Joe Jauch (analyst) return to call the action from the booth at Williams Stadium, while Emily Austen will be on the sidelines providing field-level coverage and interviews.

The Liberty Flames Sports Network radio coverage, presented by Van Wagner, will once again cover all 10 of Liberty's football games, home and away, in 2020.

Powered by the Journey, 88.3 FM in Lynchburg serves as the flagship station of the Flames statewide network. Boasting 17 stations on the network, Liberty Football can be heard from the Roanoke Valley to the Chesapeake Bay in Virginia, as well as the sand hills of North Carolina.

The radio broadcast can also be heard digitally at www.LibertyFlames.com, the My Journey FM app, the Liberty Today app and the TuneIn Radio app.

The show provides the in-depth pregame radio coverage of Liberty Football, including commentary from coaches and players.

Nick Pierce also makes his return to the broadcast team and pregame host and sideline reporter. At the conclusion of the game, listen to the Postgame Show for a complete game recap, including interviews with the Flames and Head Coach Hugh Freeze.

Weekly Liberty Football Audio Coverage
Fans wanting an inside look at Liberty Athletics are encouraged to check out the Liberty Flames Podcast.

The podcast channel features the Liberty Flames Minute, Radio Rewinds, interviews, press conferences and more. Also included on the podcast channel is The Liberty Football Show with Head Coach Hugh Freeze. Alan York hosts the hour-long show and is joined by Head Coach Hugh Freeze, assistant coaches and student-athletes as they take a look at the Flames football program.

Flames Central Podcast
Brand new to the Liberty Flames Podcast channel in 2020 is the Flames Central Podcast, a weekly program that will provide insight and analysis of Flames Athletics by the team at Flames Central. The 30-minute podcast will offer reaction to recent games, commentary on relevant topics regarding Liberty Athletics, interviews with special guests, and have some fun along the way. The show will be hosted by Emily Austen and include analysts Matt Warner, Rett McGibbon and Joe Jauch. The podcast will debut on Monday, September 21, following Liberty football's opening game against Western Kentucky.