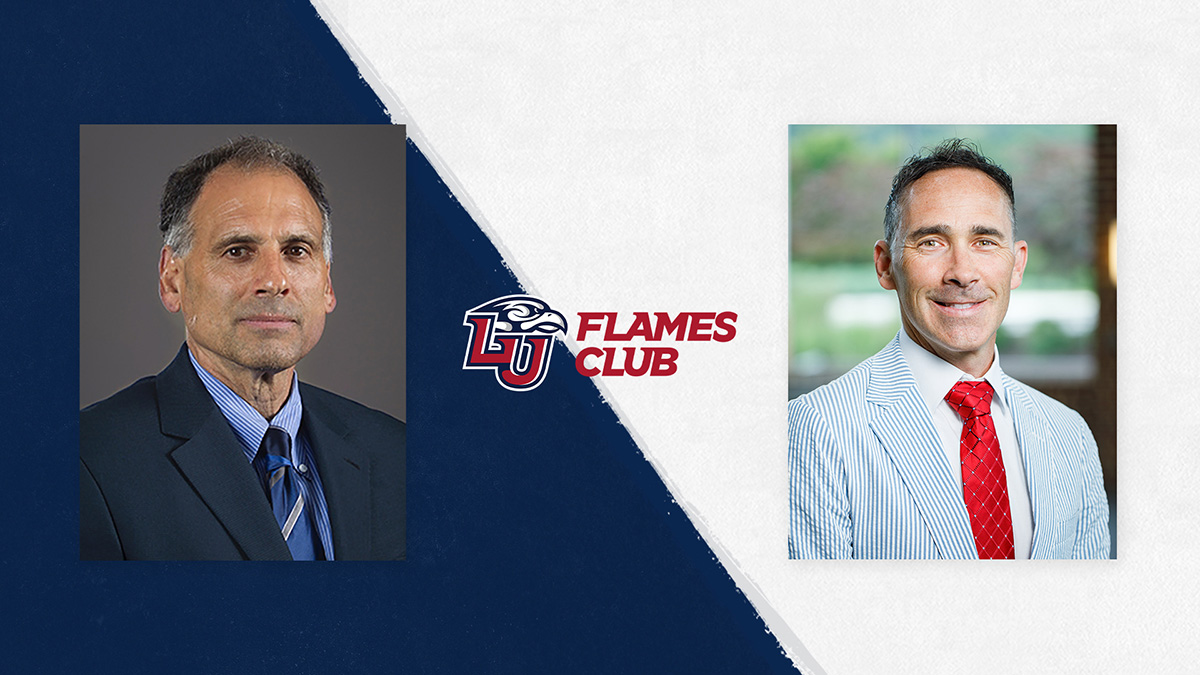 Jeff Alder (right) and Paul Rutigliano (left) are turning more than a half century of coaching and administrative experience into helping the Flames Club find new levels of success.

Jeff Alder and Paul Rutigliano are turning more than a half century of coaching and administrative experience into helping the Flames Club find new levels of success.

The pair, who have a combined 57-year association with the Flames, are well known for their dedication and commitment to helping Liberty Athletics raise through the years to its current status as a thrilling NCAA Division I program.

Following a three-decade career with the men's soccer program, including 19 as the program's head coach (2001-18), Alder transitioned to the Director of Annual Giving role for the Flames Club after announcing his coaching retirement following the 2018 season.

Alder took his winning mentally from his time on the pitch to helping the Flames Club continue its rapid growth. Alder was recently recognized for his success when he was promoted to his current position following a record year in Flames Club growth by 35 percent from the previous record. He has assisted donors with naming opportunities as a part of The Worthington Field, Football Archways and Men of Armour Football Weight Room campaigns.

In his new role, Alder has primary responsibility with Major Gifts, develop relationships with our suite holders, and take a lead on all Legacy Gifts.

"We are honored to have Jeff on our staff, as he continues to serve our members and Flames Nation," commented Mike Hagen, Liberty's Associate AD and Executive Director of Development  "Jeff's support for our student-athletes, coaches and fans is amazing, and his involvement in the Liberty and Lynchburg communities is unmatched."

Following the successful path paved from Alder, Rutigliano has also transitioned into a new role where he will continue to work with Liberty student-athletes.

After spending 25 years on the Flames football coaching staff where he worked for four different head football coaches, Rutigliano has been named Liberty's Assistant AD and Director of Letterwinners Engagement.

"Paul is an outstanding addition to the Flames Club staff, and we're thrilled to have his position to serve and engage with our former student-athletes," continued Hagen. "Paul's long history with Liberty Football, and his passion and knowledge of this campus will be a valuable resource as we look to serve our former Flames in new and exciting ways."

Rutigliano first joined the Flames' football coaching staff in 1989 under his father, Sam Rutigliano, who coached from 1989-99 and is the winningest coach in program history.

While working on staff under the Liberty Athletics Hall of Fame coach, Rutigliano served as wide receivers coach and recruiting coordinator (1989-93) and as the director of football operations (1994-99).

Rutigliano returned to Liberty Mountain in 2006 when he rejoined the staff to work under head coach Danny Rocco as Assistant Athletics Director for Football Administration.

Rutigliano worked under Rocco from 2006-11, Turner Gill from 2012-18 and current Flames Head Football Coach Hugh Freeze during the 2019 season.

During his 25 years with the football program, Rutigliano saw the Flames win 169 games, post 20 winning seasons and capture eight Big South Conference titles when Liberty completed at the FCS level.

Rutigliano played a key role in Liberty transition from the FCS to the FBS level during the 2017 and 2018 season.

During Rutigliano's final season on the football coaching staff, Liberty posted an 8-5 overall record in 2019. Liberty capped off the season with a victory over Georgia Southern in the FBC Mortgage Cure Bowl at Exploria Stadium in Orlando, Fla. With the victory, Liberty became only the third team in NCAA history to win a bowl game during its first full season at the FBS level.

Prior to returning to Liberty in 2005, Rutigliano worked in the development, management and marketing of Park ‘N Go – a company that develops and manages off-airport property at major airports.

Rutigliano's first professional position came with the NBC affiliate in Cleveland as an on air talent and writer. In 1983, he left NBC and joined the International Management Group IMG -a global company operating in thirty countries with clients and corporations in Sports & Entertainment and Media. In this position, he worked in Teams Sports and corporate marketing.

In 1989 after spending six years as an account executive for International Management Group in Cleveland, Ohio, Rutigliano joined his father in Lynchburg.

Rutigliano began his football career at Holliston High School. After graduating from Holliston, he moved to Milford Academy. After one year at Milford Academy, Rutigliano received a football scholarship to the University of New Hampshire. After a career ending injury, Rutigliano transferred in his final year to Cleveland State University and earned a bachelor's of science degree in communications in 1980.

Liberty's 2020 home schedule is very balanced with home games every other weekend, never keeping Flames Nation waiting too long for a return visit to Williams Stadium to cheer the Flames on to another victory. The Flames open the home portion of their schedule on Sept. 12 against North Carolina A&T.

Flames Nation can reserve their season tickets for as low as $70 per person for general admission seating, giving college football fans a chance to watch the highest level of competition for less than $12 per game.

By visiting www.LUFootball.com, fans can see the variety of numerus season ticket options available throughout the 2020 season.