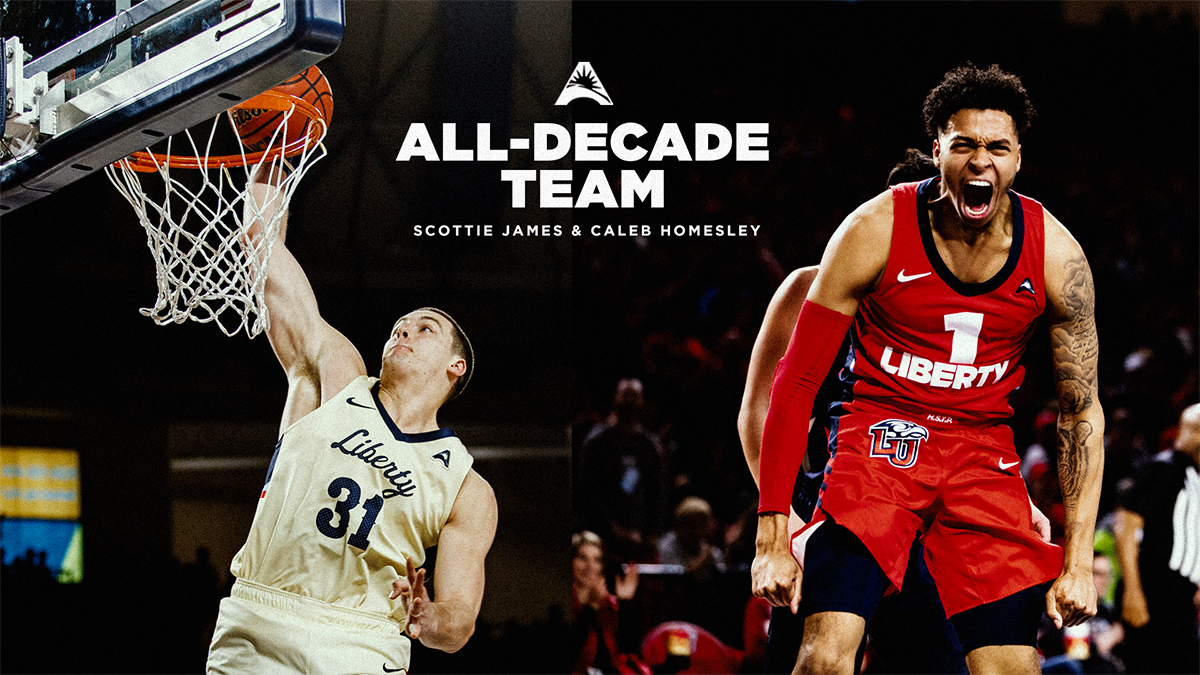 Liberty's Caleb Homesley and Scottie James have been named to the 2011-20 ASUN Conference Men's Basketball All-Decade Team, as announced today by the conference office.

Throughout the month of July, the ASUN will be recognizing each sport's top student-athletes from the recently completed decade. Liberty spent the final year and a half of the decade as a conference member after joining the ASUN on July 1, 2018.

Homesley was a two-year ASUN First Team All-Conference selection, including being named the 2020 ASUN Player of the Year and Tournament MVP. He averaged a career-best 15.3 points per game to go along with 5.7 rebounds and 2.4 assists per game this past season. During conference play, Homesley elevated his game to another level with 17.6 ppg, 5.8 rpg and 2.5 apg. He had eight games this season in which he scored 20 points or more, seven of which came during conference play. The Indian Trail, N.C., native concluded his career ranking No. 10 on Liberty's all-time scoring list with 1,539 career points and No. 8 on the all-time rebounding list with 703 career rebounds.

James was an ASUN First Team All-Conference selection for two straight seasons as well, including being named the ASUN Tournament MVP in 2019 when he led the Flames to their first ASUN Tournament title. James was one of the best players in school history, as he was a three-time all-conference selection and ranks No. 17 on the all-time scoring list with 1,323 career points. During his senior campaign, James ranked first in the conference in field goal percentage (60.5) while adding 10.8 points per game and a team-leading 7.4 rebounds per outing. The Tarpon Springs, Fla., native ended his career ranked fourth on the Flames' all-time rebounding list at 891 and was named to the 2019-20 Lou Henson Mid-Major All-American Team.