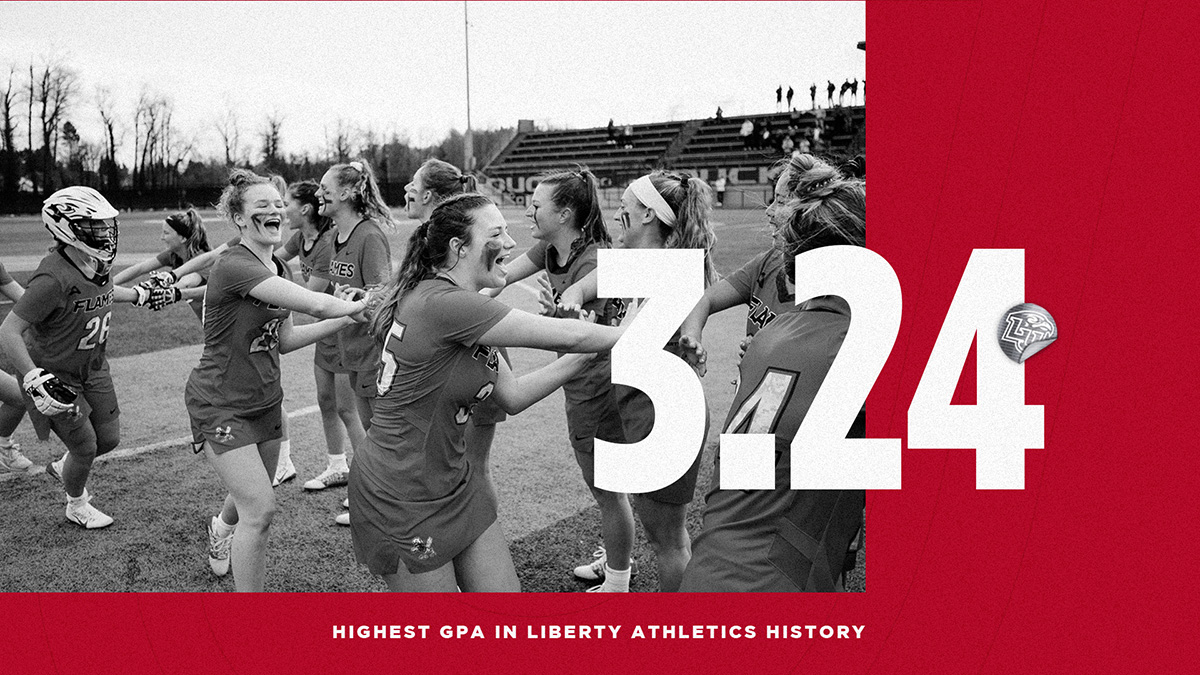 In the midst of the most challenging semester of their collegiate careers, Liberty's student-athletes rose to the occasion and excelled in the classroom like never before.

In the midst of the most challenging semester of their collegiate careers, Liberty's student-athletes rose to the occasion and excelled in the classroom like never before.

During a time when the collegiate athletics season came to an abrupt halt due to the COVID-19 virus in March, Liberty's student-athletes turned their full attention to their academic pursuits despite being scattered around the country.

As a result of their diligent efforts, Liberty Athletics saw the department's cumulative GPA rise six points from the previous record of a 3.18 GPA following the Fall 2019 semester.

Additionally, a total of 45 student-athletes are maintaining a perfect 4.0 cumulative GPA and 19 of Liberty's 20 athletics teams boast a team GPA of 3.0 or higher.

At the conclusion of the spring semester, 385 of Liberty's 557 student-athletes (69 percent) are maintaining a 3.0 or higher cumulative GPA.

Outside of the strong efforts put in by Liberty's student-athletes, Liberty's Academic Affairs for Athletics office revamped most of its traditional models to aid in the department's unprecedented success in the classroom.

This support team traditionally holds countless hours of tutoring and academic enhancement sessions throughout the Liberty Athletics Center every day of the week during the fall and spring semesters.

Once Liberty University moved the remainder of the spring semester to mostly online classes due to the COVID-19 virus, this group quickly pivoted its working efforts.

Through video communications platforms like Microsoft Teams and Zoom, the Liberty's Academic Affairs for Athletics staff was able to seamlessly continue to walk alongside Liberty's student-athletes during their academic, athletic, social and spiritual development journey.

Earlier this month, Liberty Athletics celebrated 88 of its student-athletes completing their degrees at Liberty University.

Additionally, the NCAA announced the athletics department's graduation success rate was at 88 percent in November, accounting for the highest recorded marks in department history.

Liberty's student-athlete graduation success rate (GSR) has seen an increase or matched its previous year's total each of the last seven years and eight out of the last nine years, improving from a 69 percent rate in 2009-10.

The winter sports season was Liberty's most successful collective season, with the department capturing five conference titles during this portion of the 2019-20 athletics year.

In addition to each winter sports program claiming a conference title, all five programs saw their cumulative team GPA rise during the spring semester.

As previously mentioned, the Liberty women's swimming & diving team finished the spring with a 3.70 cumulative team GPA after posting a 3.69 mark at the end of the fall semester.

Liberty's men's basketball program claimed its second straight ASUN Men's Basketball Championship and posted a 30-4 overall record. The Flames finished the spring with a 3.17 cumulative team GPA after posting a 3.11 team GPA in the fall.

Liberty's women's basketball program claimed a share of the ASUN Conference title, while posting a 3.25 spring GPA. The Lady Flames finished the fall semester with a 3.21 team GPA.

Liberty's men's and women's track & field programs swept both the titles at the ASUN Indoor Track Championships for the second year in a row, giving retiring head coach Brant Tolsma the 115th and 116th conference titles during his illustrious 34-year coaching career.

Liberty's football program also experienced tremendous success in 2019-20, both on the gridiron and in the academic efforts.

Last December, the Flames defeated Georgia Southern in the 2019 FBC Mortgage Cure Bowl, becoming the third team in NCAA history to win a bowl game during its first full season at the FBS level. Liberty finished the season with an 8-5 record, its highest win total since 2014.

In the classroom, Liberty's football program saw its student-athletes produce a 20-point increase in their team GPA. The Flames finished the spring semester with a 2.78 team GPA, giving the program a cumulative team GPA of 2.74.

"For our student-athletes to set an all-time GPA record this semester, in light of the disruptions they experienced related to COVID-19, is truly extraordinary. It is also a credit to the outstanding work of the Academic Affairs for Athletics staff and the Liberty faculty. This level of academic success reinforces our confidence in Liberty's whole person development model that is committed to the athletic, academic, spiritual and social development of our student-athletes."
Ian McCaw, Director of Athletics

"We are so proud of our student-athletes resilience during this academic shift. Their willingness to forge ahead and collaborate with professors, tutors and staff demonstrates a commitment to academic excellence."
Kristie Beitz, Senior Associate Athletics Director - Academic Affairs

"Liberty Athletics is committed to excellence in every aspect of the student-athlete experience and the outstanding academic success over this past year serves as a testimony of that commitment. None of the success in the classroom could have been achieved without the hard work, dedication and commitment of the Liberty Academic Affairs for Athletics staff and I would like to thank them for their contributions to our student-athletes."
Kelly Findley, Head Men's Soccer Coach