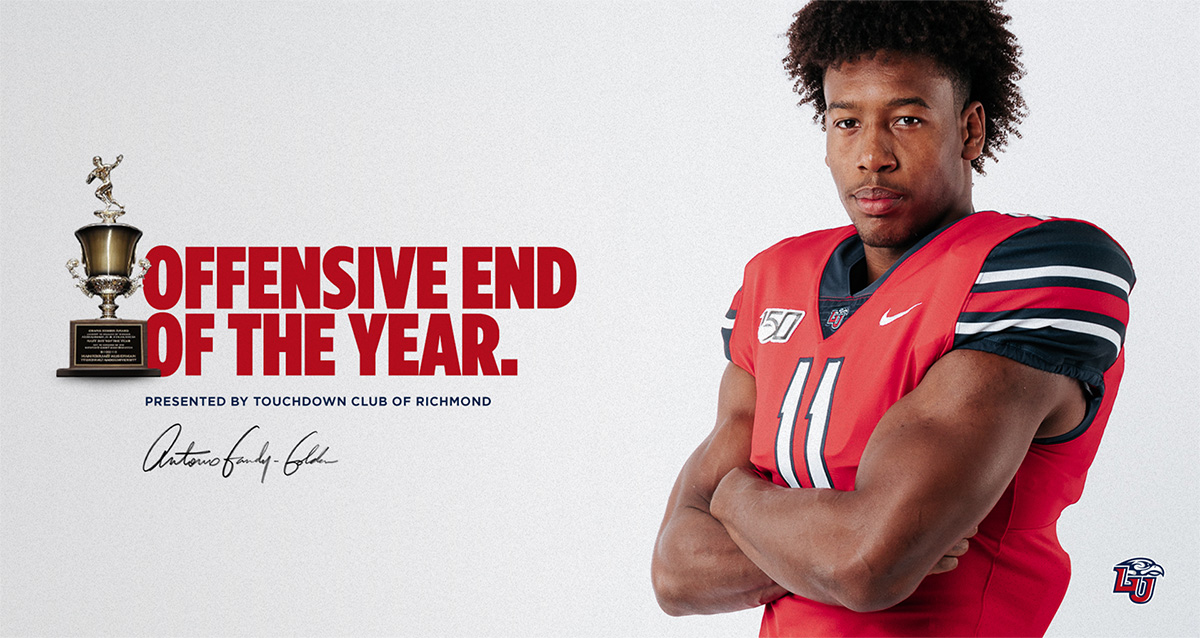 Liberty's Antonio Gandy-Golden has been recognized as one of the top players in the Commonwealth of Virginia as recognized by the Touchdown Club of Richmond.

Liberty's Antonio Gandy-Golden has been recognized as one of the top players in the Commonwealth of Virginia as recognized by the Touchdown Club of Richmond.

During the 2019 Dudley and Lanier Awards Banquet, held Sunday night at the Hilton Richmond Hotel, Gandy-Golden was named the Offensive End of the Year award winner. Gandy-Golden was one of 14 players honored during the annual awards banquet.

Gandy-Golden has rewritten all of Liberty's career receiving records. He is the school's all-time leader in career receiving yards (3,751), receptions (235) and receiving touchdowns (32). He also holds the program record with 17 100-yard games, seven of which have come during his senior season.

Gandy-Golden was one of 12 semifinalist for the 2019 Biletnikoff Award. The Biletnikoff Award annually recognizes the season's outstanding FBS receiver in college football. Any player, regardless of position (wide receiver, tight end, slot back, and running back) who catches a pass is eligible for the award.

The Touchdown Club of Richmond is a sports-social organization, based in Richmond, that promotes the best interests of the American game of football and sports in general, under the guidance of elected officers, with the predominate purpose being to recognize worthy athletes for their accomplishments and to encourage them to continue their education and athletic careers.