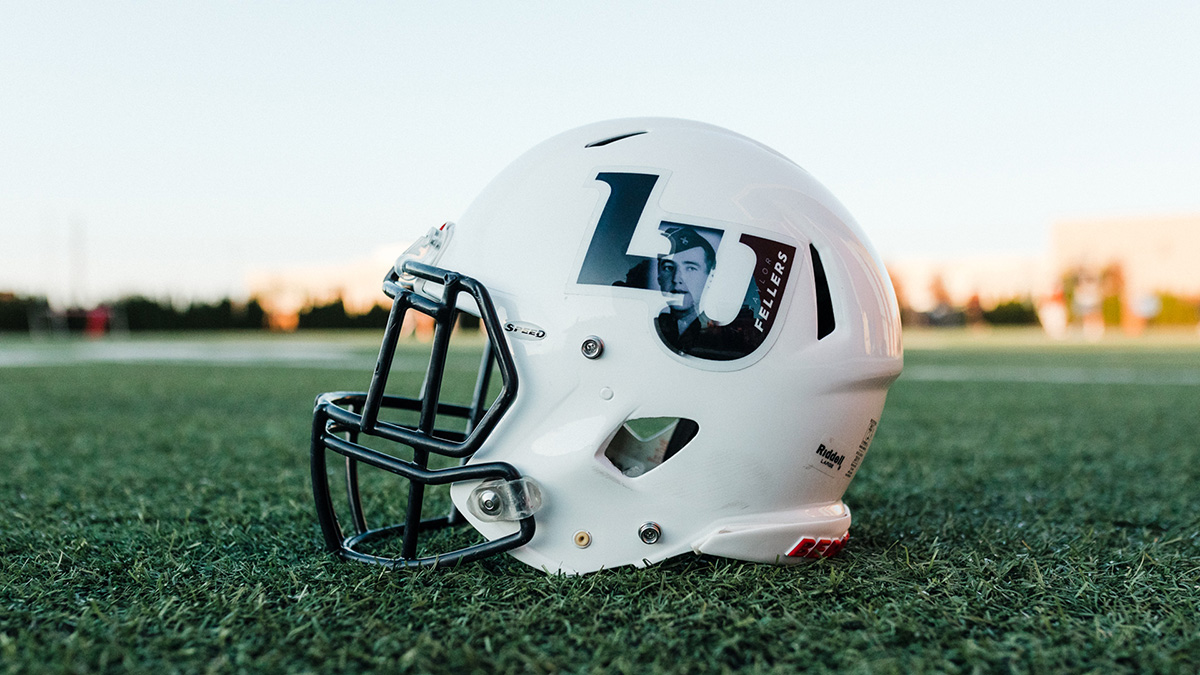 Liberty Athletics will honor the "Bedford Boys" with a special helmet decal on Saturday during the Flames' annual Military Appreciate Day game.

On Saturday where the Liberty Football program recognizes all members of our military during its game against New Mexico State, the Flames will wear a special helmet honoring the 75th Anniversary of the D-Day invasion by honoring our "Bedford Boys".

It is said that the county of Bedford, with its county seat the town of Bedford just 30 minutes from the campus of Liberty University, suffered the greatest loss per capita of any community during the D-Day invasion.  The county had around 30,000 people in 1940. Of those, around 4,000 served in World War II. There were 52 men from Bedford County that took part in the invasion of Normandy, of those 41 died in the battles for France. Today, we honor the 21 men from just one company, the local National Guard unit, Co. A, 1/116, 29th Division.

In 1987, Roanoke native and D-Day veteran J. Robert "Bob" Slaughter started garnering interest for a National D-Day Memorial, and in 1989, he and several others formed a committee to raise interest in constructing it. In 1994, the town of Bedford offered Slaughter's D-Day Memorial Foundation 20 acres of land in view of the Blue Ridge Mountains as a location for the future site of the National D-Day Memorial.

The foundation then hired an executive director, Richard B. Burrow, in 1996 and announced plans for a $12 million memorial and education center in the town of Bedford. On Veteran's Day in 1997, construction began on the National D-Day Memorial in Bedford. President George W. Bush dedicated the memorial on June 6, 2001.

The 88-acre memorial grounds take visitors on a journey through World War II, creating a solemn atmosphere to gain insight and learn more about the events that shaped our history. At its center stands a 40-foot tall arch, embellished with "Overlord", the name given to the operation. The arch is highlighted by a reflecting pool that surrounds a captivating scene that is symbolic of the journey soldiers made onto the blood-stained beaches of Normandy. The National D-Day Memorial is open Monday through Sunday from 10 a.m.-5 p.m. and hosts several events related to remembering World War II throughout the year.

Also located in the town of Bedford is the Bedford Museum & Genealogical Library, which allowed the usage of the "Bedford Boys" images on the helmets. The museum's three floors of exhibits tell the rich history of Bedford County from Native Americans through today. Co. A, 1/116, 29th Division has a room that tells its rich history from World War I through today. The museum also has genealogical and research rooms with more information on the Bedford boys from the French and Indian Wars through today. The Museum is open Monday through Friday 10 a.m. – 5 p.m. and Saturday 10 a.m. – 3 p.m. They can be reached at 540-586-4520 or www.bedfordvamuseum.org.