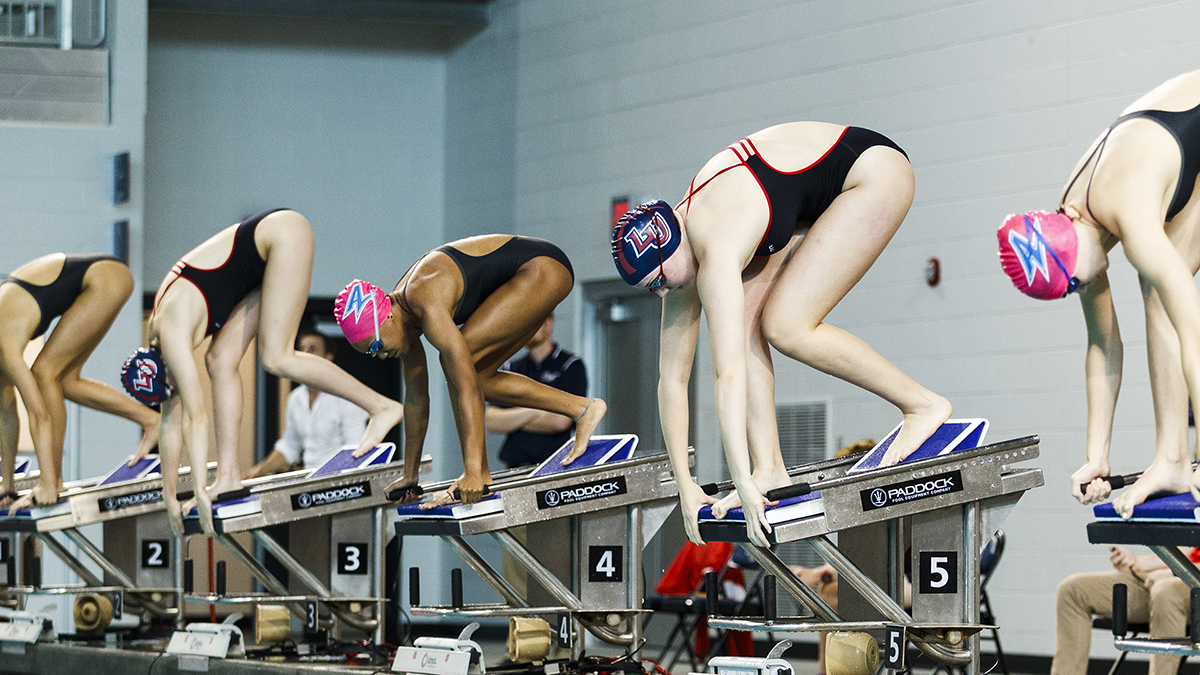 Liberty will host the TYR '85 Invite, Friday through Sunday at Liberty Natatorium.

Liberty will host an in-season swimming & diving invitational for the second year in a row, hosting the TYR '85 Invite, Friday through Sunday at Liberty Natatorium.

How to Follow the Lady Flames
This weekend's meet will have live results through the website version and also on mobile devices through the MeetMobile app.

The meet will help the teams preview the format for their conference meets, as there will be morning prelims at 10 a.m. each day and evening finals starting at 6 p.m. on Friday and Saturday and at 5 p.m. on Sunday. Tennessee's Allan Jones Aquatic Center will host the 2020 CCSA Swimming & Diving Championships, Feb. 19-22.

Team Notes
• Liberty is 6-2 in dual meets this season after going 2-1 at a quad meet hosted by BYU Nov. 8-9. It was the team's first-ever meet at BYU, and the Lady Flames fell to the Cougars while defeating UC Davis and Dixie State.

• Liberty opened the home portion of its schedule with a 203-134 win over UNC Asheville on Oct. 25-26. The Lady Flames are 11-0 all-time in dual meets at the Liberty Natatorium.

• Liberty earned its 100th win in program history to open this season, defeating St. Bonaventure 269.5-82.5 at the Penn State Sprint Fest on Oct. 4.

• 10th-year Head Coach Jake Shellenberger has led the Lady Flames from the program's inception. He has posted a 105-32 dual-meet record, being named CCSA Women's Swimming Coach of the Year three times (2012, 2014, 2019). His teams have gone 54-14 all-time against CCSA competition.

• Liberty won its second-ever CCSA title in 2019, and first since 2014. The Lady Flames scored a meet-record 1,859.5 points while ousting four-time defending champion FGCU by nearly 200 points. It came five years to the day after Liberty's first championship.

• The state-of-the-art Liberty Natatorium opened on Dec. 1, 2017 with the Central Virginia Duals, and was dedicated on Jan. 26, 2018 with an official ceremony. The Liberty Natatorium provides one of the best venues for collegiate swimming and diving in the nation, with a Olympic-sized competition pool and separate diving well and seating for 1,400 spectators in a wraparound setting.

Student-Athlete Notes
• A total of 15 different Lady Flames have recorded at least one individual-event victory this season, after Lauren Chennault (one-meter, three-meter diving), Lindsey Cohee (100 fly, 200 fly) and Abigail Egolf-Jensen (platform diving) picked up their first wins of the season against UNC Asheville.

• Sophomore Olivia Robinson, the 2019 VaSID State Rookie Diver of the Year, scored the most points by a Liberty diver at the 2019 CCSA Championships (62), taking second in both one-meter and three-meter. She holds Liberty's record for platform diving (229.58). Robinson has already qualified for the 2020 Zone Championships in one-meter diving, scoring 267.80 at Penn State.

• Duquesne, Saint Francis (Pa.) and Vanderbilt will all be making their first appearance at the Liberty Natatorium. Duquesne (Jan. 11, 2013) and Vanderbilt (Nov. 8, 2013) have competed in swimming meets at Liberty before, but those meets were at La Haye Aquatics Center. Liberty's 164-98 win over Duquesne on Jan. 11, 2013 was the first televised home meet in program history.

Up Next
Lady Flames who have attained qualifying marks will compete in the Toyota U.S. Open, held in Atlanta, Ga., from Dec. 4-7.