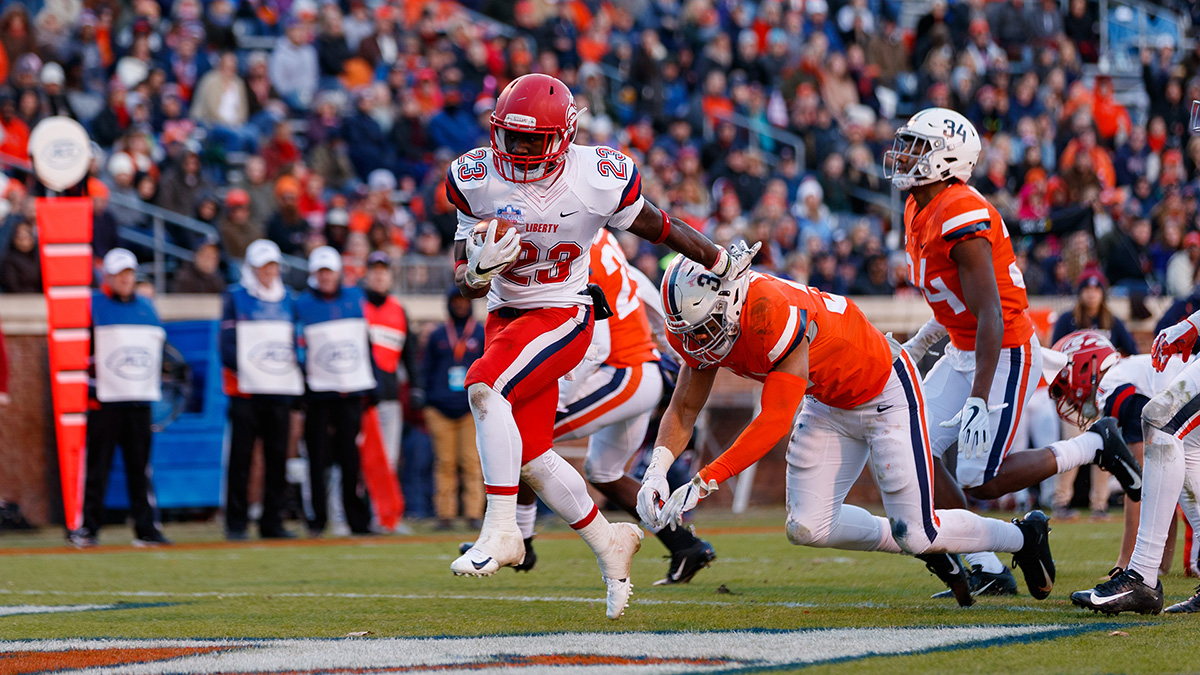 For the second year in a row, the Flames will square off against Virginia during the month of November.

1. Liberty (6-4) will wrap up its four-game road swing with a short jaunt north on Route 29 to face ACC Coastal Division leader Virginia (7-3, 5-2 ACC). Playing at Scott Stadium for the second straight season, the Flames are in search of their first-ever victory over an ACC opponent.
2. Liberty is one win away from bowl eligibility during its first season as a fully bowl-eligible FBS member. One more victory would give the Flames their first 7-win season since 2014.
3. Closing out the only four-game road swing by an FBS team in 2019, Liberty is just 3-8 in road games as an FBS member. The Flames will look to snap Virginia's six-game home winning streak.
4. Senior QB Stephen Calvert is one of two active FBS QBs with 11,000 career passing yards and owns a 23/3 TD to interception ratio this season. He has thrown 281 passes since his last pick on Sept. 7 at Louisiana but struggled during a 149-yard, three-interception outing at Virginia last season.
5. Senior WR Antonio Gandy-Golden ranks No. 2 in the nation with 1,244 receiving yards this season and is 136 yards away from setting a new Liberty single-season receiving record.
6. Redshirt senior DE Jessie Lemonier has recorded 8.5 sacks this season (tied for No. 13 nationally), putting him on the verge of becoming the first Flame ever to record a pair of double-digit sack seasons.

A Liberty Win Would ...
• Achieve bowl eligibility during the Flames' first season as a fully bowl-eligible FBS member.
• Be the Flames' seventh victory of the season, marking their most triumphs in a single year since 2014 (9-5). It would be Liberty's 17th season of 7+ wins in program history.
• Give the Flames their first-ever victory over Virginia and their first-ever triumph over an ACC opponent (in their eighth all-time ACC matchup).
• Improve the Flames' record vs. in-state varsity opponents to 2-0 in 2019, 4-1 as an FBS member and 43-37 all-time.
• Give the Flames three road victories in a season for the first time since 2014, when Liberty went 5-3 away from home.
• Snap Virginia's six-game home winning streak at Scott Stadium, which began with a 45-24 victory over the Flames on Nov. 10, 2018.