Lady Flames to Honor Seniors on Sunday Against Kennesaw State 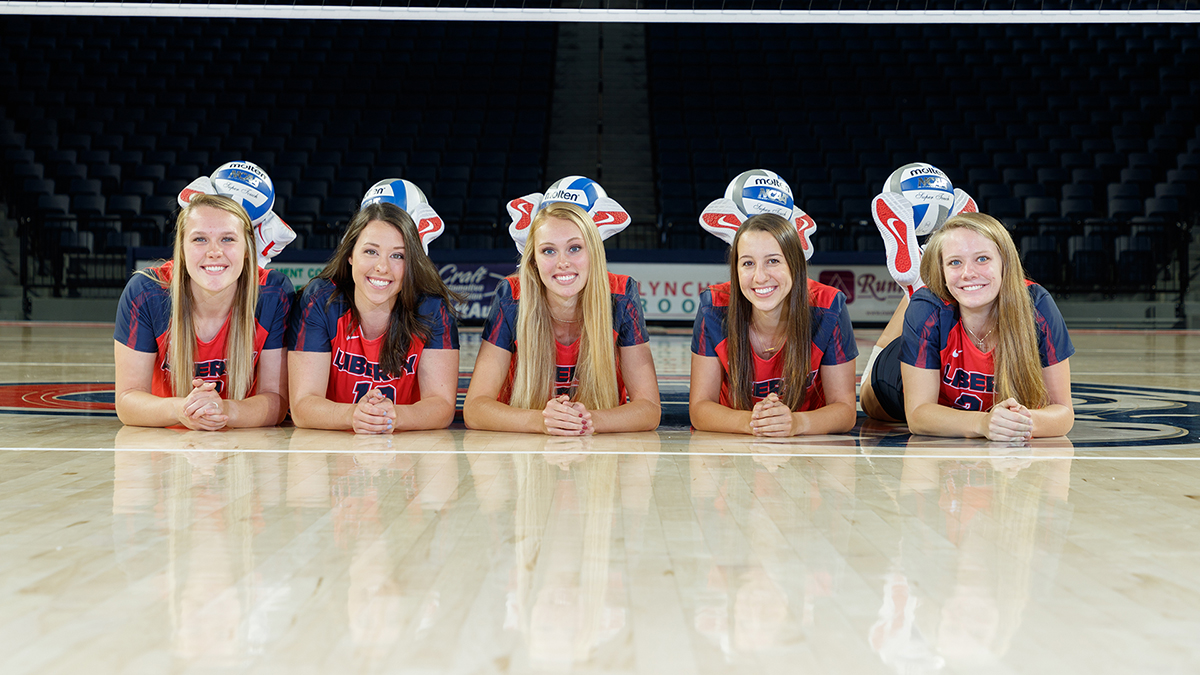 Liberty will honor its seniors with a prematch ceremony on Sunday.

The ASUN's third-place team, Liberty (18-9, 11-4 ASUN), currently on a four-match winning streak, welcomes second-place Kennesaw State (18-8, 11-3 ASUN) to the Vines Center for both teams' regular-season finale on Sunday at 1 p.m. KSU can wrap up the No. 2 seed for the ASUN Volleyball Championship with a win at Jacksonville on Friday. Liberty needs Jacksonville to beat KSU on Friday and needs to defeat the Owls on Sunday to secure the second seed.

STARTING ROTATION
1. Liberty has won four straight matches and is 6-1 during the second half of its ASUN schedule. Liberty has hit .289 over the last four matches, with Amelia Johnson (4.56 kps) and Casey Goodwin (3.69) leading the way and Hannah Morris averaging 11.50 assists per set during that span.

2. The Lady Flames will honor their four seniors - Payton Carter, Casey Goodwin, Anna Gragg and Hannah Morris - with a Senior Day ceremony on Sunday. These seniors have been instrumental in Liberty's success during the team's first two seasons in the ASUN Conference.

3. Redshirt junior Amelia Johnson leads all ASUN players with 396 kills. She was named to the 2019 CoSIDA Academic All-District Team on Thursday, the first Lady Flame since Becca Haraf in 2013, and seventh player in program history to earn the honor. Johnson's 29 kills against Stetson and North Alabama are tied for the most by a Lady Flame in any match under the 25-point system.

5. Senior right-side hitter Casey Goodwin, a two-time all-conference selection, was a first team All-ASUN pick last year. She averaged 5.29 kills at a .373 pace during Liberty's matches at North Florida and Stetson, and ranks 14th in program history with 1,101 career kills.

6. Senior setter Hannah Morris was named the 2019 Fan-Voted ASUN Preseason Setter of the Year. Morris' career-high 61 assists on Oct. 13 against Stetson are the most by any player in the Vines Center under the current 25-point rally-scoring system (since 2008). She averaged 12.86 assists per set in her last two matches and is now ranked ninth in program history with 2,213 career assists.

7. Liberty welcomes six newcomers, including five freshmen and transfer junior Macy Phillips. Phillips, a libero, comes to Liberty from Florida, where she was a reserve on the Gators' national finalist squad in 2017. Phillips ranks fifth in the ASUN with 4.60 digs per set.

- Liberty is 9-1 at home this season and has won 15 out of its last 16 home contests. The Lady Flames outhit opponents .278-.134 on average at the Vines Center this year.

- After posting 10 blocks on Tuesday against Stetson, Liberty has now posted 10 or more blocks 12 times this season after also recording 12 10-block matches in 2018.

- The Lady Flames are now ranked 35th in the nation with 2.54 blocks per set.

- Amelia Johnson (three times), Casey Goodwin (vs. Louisiana) and Anna Gragg (vs. Northern Arizona) all have at least one 20-kill match this season. The last time three Lady Flames had a 20-kill match in the same season was 2003 (Erin McKeown, Becky Rudnick and Tatiana Tkachuk).