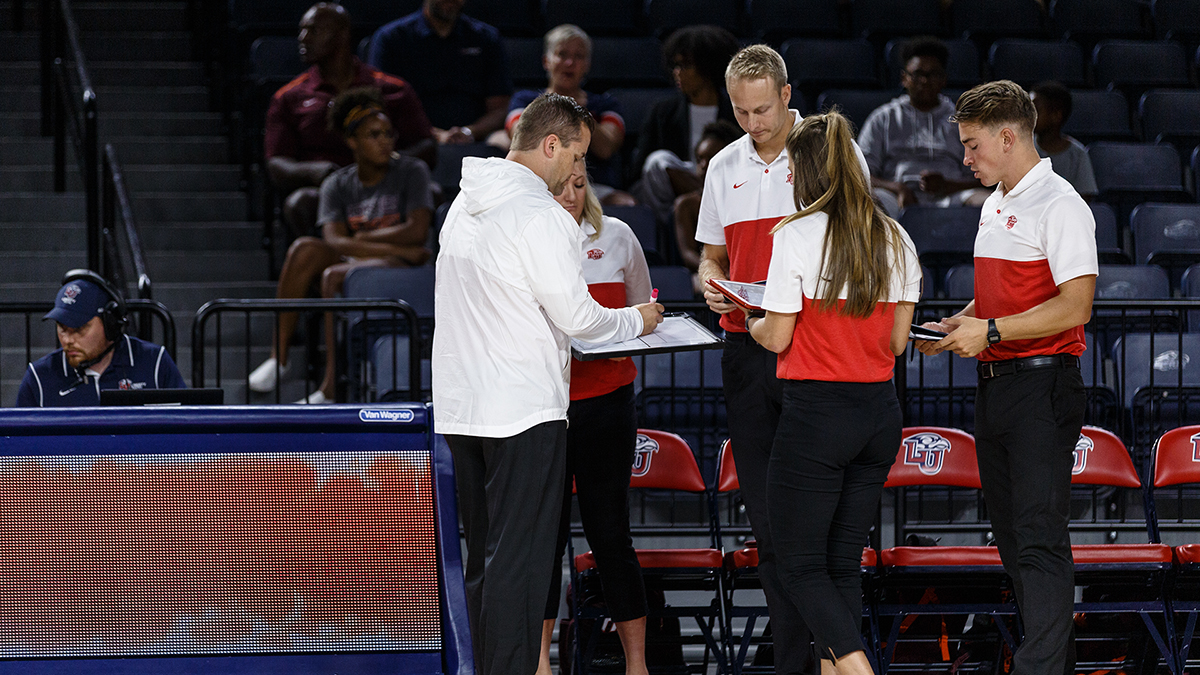 Head Coach Trevor Johnson and his staff have announced the addition of Lydia Burts, Julia Mangum and Trinity Watts during the early signing period.

Liberty volleyball second-year head coach Trevor Johnson and his staff have announced the addition of three student-athletes to the team's 2020 roster. Lydia Burts, Julia Mangum and Trinity Watts have all signed commitments to attend Liberty and play volleyball beginning in the 2020-21 academic year. Burts and Mangum will enroll during the Spring of 2020.

"This incoming class is one of our best recruiting classes in the history of our program!" Johnson said. "These three young ladies will not only make a big impact on the court, but they are strong Christian young women who will do great things for His kingdom. There is no doubt in my mind that they will leave their legacy once they graduate."

Lydia Burts (MB, 6-3, Anderson, S.C./T.L Hanna High School)
Lydia Burts comes to Liberty from T.L. Hanna High School, where she played middle blocker for three years before missing this season due to injury. A two-time All-Region player, she was named to the AAAAA All-State team last year when she led the State of South Carolina with 181 blocks. As a sophomore, she hit .387 and added 121 blocks. Also a strong student, Burts is a member of the Beta Club, Interact Club, Random Acts of Kindness and National Honor Society.

"We are extremely excited about Lydia," Johnson said. "She was being heavily recruited by some of the top power 5 programs in the country, but we are sure glad that she chose Liberty! She is a very athletic middle blocker who can jump and thump! She is a force at the net as well. I'm excited to see her development over these next four years."

Julia Mangum (MB, 6-2, Jacksonville, Fla./Home School)
Julia Mangum has been a standout middle blocker since she started playing high school volleyball, being named to PrepVolleyball's Frosh 59 special mention. As a sophomore, she was named player of the game when she helped Christ's Church Academy win the FSAA 3A State Championship. MaxPreps.com voted her the No. 1 blocker in 3A in Florida during the 2017 season. After receiving PrepVolleyball Super Soph 79 honors, she was named All-American by both Esmark and Under Armour last year. As a junior, she had the top hitting efficiency (.502) in the state of Florida. Her career totals include 1,290 kills, 579 blocks, 200 aces as a .391 hitting percentage.

"We are extremely excited about Julia," Johnson said. "She is everything you want in an athlete. She can jump high, hit hard, and she can block! She is not only a great talent, but a great teammate with great character. She loves the Lord and her bright smile will light up the court! She can play a variety of positions for us which we are really looking forward to seeing what she can do for us."

Trinity Watts (OH/RS, 6-0, Katy, Texas/Episcopal High School)
Trinity Watts has had a strong prep career as an outside hitter, earning numerous awards. As a freshman, she was named a Prep Volleyball Deep Impact Newcomer while also appearing on the AVCA Phenom Watch List and the Prep Volleyball Frosh 59. She has been listed among the AVCA Phenoms three times. A two-time all-conference honoree, she received TAVC SPC All-State honors as a sophomore. Watts was named VYPE Utility Player of the Year in 2018. This year, she appeared on the Under Armour All-America Watch List and PrepVolleyball's "The 150" List. She also started for the varsity basketball team and high jumped as a freshman, sophomore and senior.

"We are extremely excited about Trinity," Johnson said. "Trinity comes to us from Houston, Texas which has produced some of the best athletes in America. Her high school team was one of the best in the State of Texas this year. She is a gym rat who grew up in the gym at a very young age with her volleyball-coaching mom, Amanda. She has a tremendous volleyball IQ and she too can play a variety of positions for us."