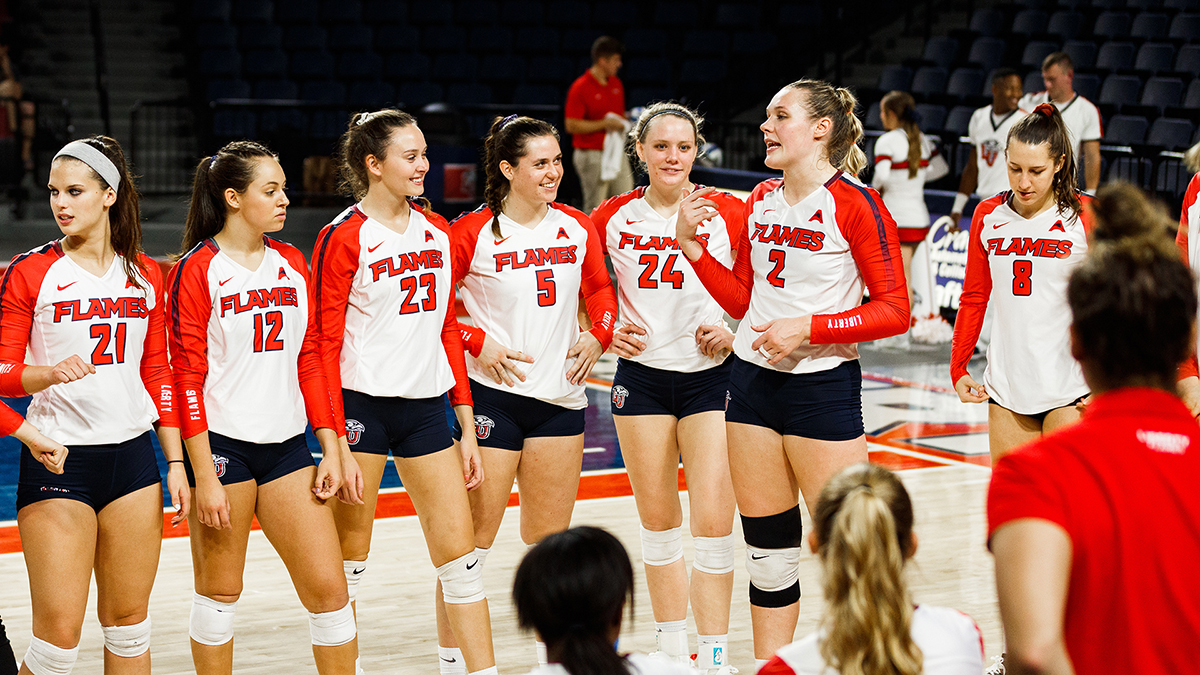 Liberty volleyball will play at North Florida on Sunday and at Stetson on Tuesday.

The ASUN race is heating up, as FGCU leads at 12-1, followed by Kennesaw State at 9-3. Liberty (9-4) is third, a half-match ahead of Lipscomb (8-4) and 1.5 matches in front of Stetson (7-5) entering the week. The top six teams qualify for the ASUN Championship, to be hosted by FGCU.

2. Redshirt junior Amelia Johnson leads all ASUN players with 4.31 kills per set in conference play.. She scored 29 kills against both Stetson and North Alabama, tying the program single-match record for most kills in a single match under the current 25-point rally-scoring system.

4. Senior right-side hitter Casey Goodwin, a two-time all-conference selection, was a first team All-ASUN pick last year when she led the ASUN with 40 aces. She posted her 50th career 10-kill match on Sunday, and ranks 15th in program history with 1,064 career kills.

5. Senior setter Hannah Morris was named the 2019 Fan-Voted ASUN Preseason Setter of the Year. Morris' career-high 61 assists on Oct. 13 against Stetson are the most by any player in the Vines Center under the current 25-point rally-scoring system (since 2008). She dished out 55 assists on Sunday against North Alabama and is now ranked ninth in program history with 2,123 career assists.

6. Rajini Fitzmaurice has three 10-kill matches this season. She scored 15 kills at a .667 pace at NJIT and sent down 13 kills at .440 against Lipscomb before scoring 11 kills vs. North Alabama.  Her .667 at NJIT was the best hitting percentage by a Liberty freshman in the rally-scoring era.

7. Liberty welcomes six newcomers, including five freshmen and transfer junior Macy Phillips. Phillips, a libero, comes to Liberty from Florida, where she was a reserve on the Gators' national finalist squad in 2017. Phillips ranks fourth in the ASUN with 4.60 digs per set.

- After posting 13 blocks on Thursday against Lipscomb, Liberty has now posted 10 or more blocks 11 times this season after recording 12 10-block matches in 2018.

- The Lady Flames are now ranked 35th in the nation with 2.53 blocks per set.

- Amelia Johnson (three times), Casey Goodwin (vs. Louisiana) and Anna Gragg (vs. Northern Arizona) all have at least one 20-kill match this season. The last time three Lady Flames had a 20-kill match in the same season was 2003 (Erin McKeown, Becky Rudnick and Tatiana Tkachuk).