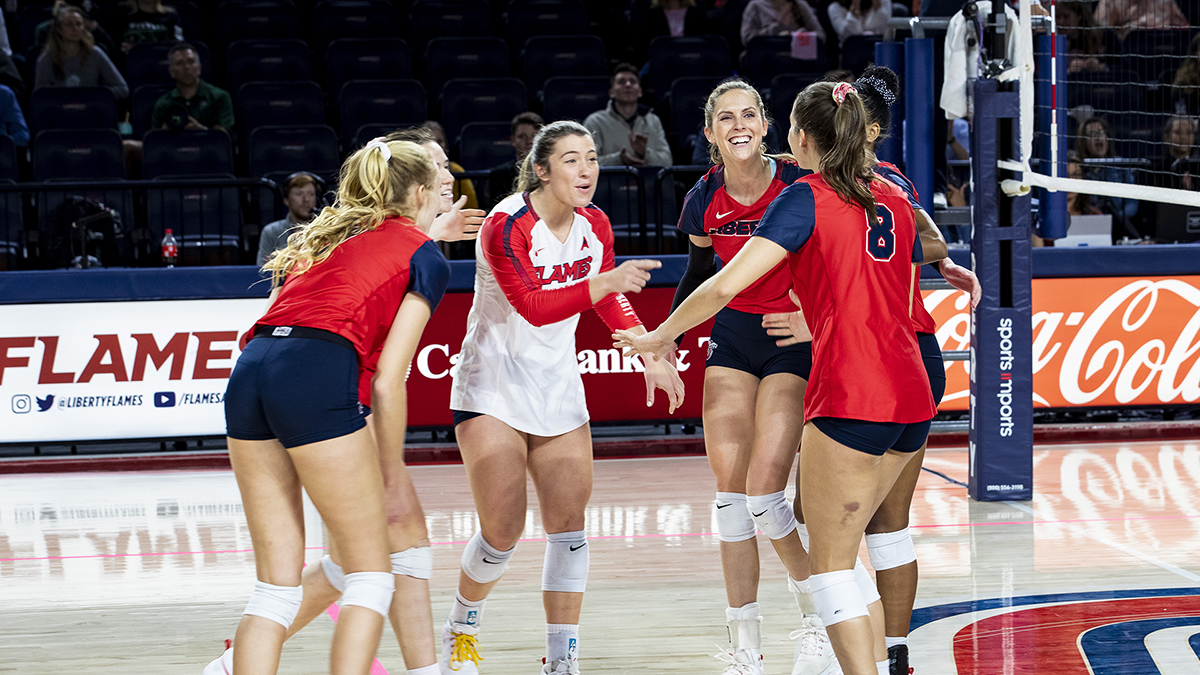 Liberty (12-7, 5-2 ASUN) wraps up the first half of its ASUN schedule on Friday night, taking on Kennesaw State (12-6, 5-1) at 7 p.m. at KSU's Convocation Center. Friday's match features the ASUN's current second- (KSU) and third-place (Liberty) teams. Liberty enters the weekend trailing FGCU (6-1) by just one match in the league standings.

Kennesaw State won both meetings between Liberty last year, including a 3-0 decision at the KSU Convocation Center on Nov. 2. The Convocation Center was the site of the first collegiate matches played by Liberty seniors Casey Goodwin, Anna Gragg and Hannah Morris.

STARTING ROTATION
1. Liberty has gone 1-1 each of the last two weekends. Last Friday, Liberty swept NJIT to extend its home winning streak to 13 matches. On Sunday, Stetson rallied to defeat the Lady Flames 3-2, despite Liberty scoring a season-high 76 kills, one shy of the program's 25-point rally-scoring record.

2. Redshirt junior Amelia Johnson leads the conference with 4.84 kills per set and 5.3 points per set in ASUN matches. Her 29 kills against Stetson are tied for the second most by a Liberty player in rally-scoring history (since 2001) and tied for the most under the current rally-scoring system. She leads the team with 16 double-digit kill matches and seven double-doubles.

3. Senior middle blocker Anna Gragg, a three-time all-conference performer, is 25th nationally in hitting percentage (.410) and leads the ASUN with a .464 hitting percentage in confererence matches. She and Casey Goodwin were both voted to the ASUN Preseason All-Conference Team.

4. Senior right-side hitter Casey Goodwin, a two-time all-conference selection, was a first team All-ASUN pick last year when she led the ASUN with 40 aces. On Sunday against Stetson, she became the 16th player in program history, and first since Caroline Douglas in 2014, to reach 1,000 kills.

5. Senior setter Hannah Morris was named the 2019 Fan-Voted ASUN Preseason Setter of the Year. Morris' career-high 61 assists on Sunday against Stetson are the most by any player in the Vines Center under the current 25-point rally-scoring system (since 2008). She needs 25 more assists to become the 10th player in program history with 2,000 career assists.

6. Second-year head coach Trevor Johnson has had a highly successful coaching career. Including his time at Concordia (Calif.) and Liberty, he has posted a 113-38 career record. He coached the Concordia men's team to an NAIA National Championship in 2013.

7. Liberty welcomes six newcomers, including five freshmen and transfer junior Macy Phillips. Phillips, a libero, comes to Liberty from Florida, where she was a reserve on the Gators' national finalist squad in 2017. Phillips ranks fourth in the ASUN with 4.44 digs per set.

- The Lady Flames are 10-1 in matches this year in which they win the first set.

- Amelia Johnson (twice), Casey Goodwin (vs. Louisiana) and Anna Gragg (vs. Northern Arizona) all have at least one 20-kill match this season. The last time three Lady Flames had a 20-kill match in the same season was 2003 (Erin McKeown, Becky Rudnick and Tatiana Tkachuk).

- The Lady Flames have posted 10 or more blocks eight times this season after recording 12 10-block matches in 2018.