The Liberty athletics department and the baseball program will hold a dedication for the naming of the Worthington Field at Liberty Baseball Stadium on Oct.19 at 10 a.m. at the stadium.

The ceremony is opened to the public with light refreshment being served after the dedication. Following the ceremony, members of the Liberty baseball team will provide tours of the stadium.

Fans are encouraged to park in the Game Day Orange Lot (Liberty Baseball Stadium and Liberty Athletic Center) for the ceremony.

The Campaign to Name the Field
In an effort to recognize the baseball program's all-time winningest coach, Al Worthington, Liberty Athletics launched the Worthington Field naming campaign in February.

The Flames Club received lead gifts from two recognizable Liberty Baseball families. Former baseball standouts David and Jason Benham (1995-98) provided a lead gift to launch the campaign. While the twin Benham brothers did not play for Worthington, they wanted to contribute to the effort to honor him for his outstanding testimony and relentless mission to use baseball as a platform for evangelism. Liberty Athletics will commemorate the Benham's gift with the naming of a yet-to-be-determined space in their honor at Liberty Baseball Stadium.

All generations of Liberty Baseball players were represented in the campaign. Additional honorary gifts, to be recognized at later dates included the Home Radio Booth, Coaches' Reception Area, and lockers in the locker room, among other donations. 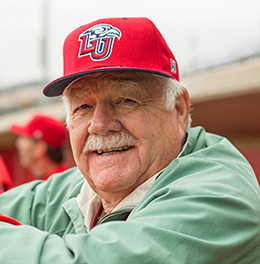 In 1974, Worthington came to Lynchburg to start Liberty's baseball  program. His 13-year coaching stint enabled him to become the winningest coach in program history and finish with a 64.4 winning percentage (343-189-1). Following the first year of the program, Liberty never again had a losing record during the final dozen years under Worthington 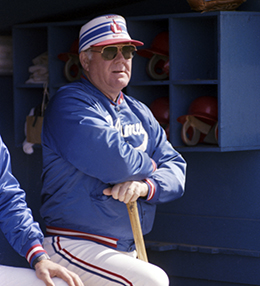 During his time at the head of the program, Worthington coached four All-Americans and nine players who went on to play professional baseball, including Liberty Athletics Hall of Fame inductees Sid Bream (2009), Renard Brown (2019), Lee Guetterman (2010), Pat Sipe (2015) and Randy Tomlin (2016).

Since opening in 2013, the Liberty Baseball Stadium has been recognized as one of the top collegiate baseball stadiums in the country, including top-five rankings by Stadium Journey and NCAA.com.

Ian McCaw, Liberty University Director of Athletics
"We look forward to celebrating Coach Worthington, the Founder of Liberty baseball, in a most deserving way as we name the field at Liberty Baseball Stadium in his honor. We are grateful for the generosity and leadership of the Benham brothers and Bream family in recognizing the importance of honoring Coach Worthington for his service to Liberty and the enormous impact that he had on the baseball program and athletics department."

Scott Jackson, Liberty Head Baseball Coach
"We are excited to honor Coach Worthington and to name the field at our incredible stadium after someone who has left an undeniable legacy. Coach Worthington has impacted the lives of so many who have called Liberty Baseball home. To be able to continue to grow his legacy both on our campus and beyond is something that we all look forward to."