The Flames will welcome the Bengals of Idaho State to Williams Stadium on Saturday for Liberty's annual Homecoming football game. 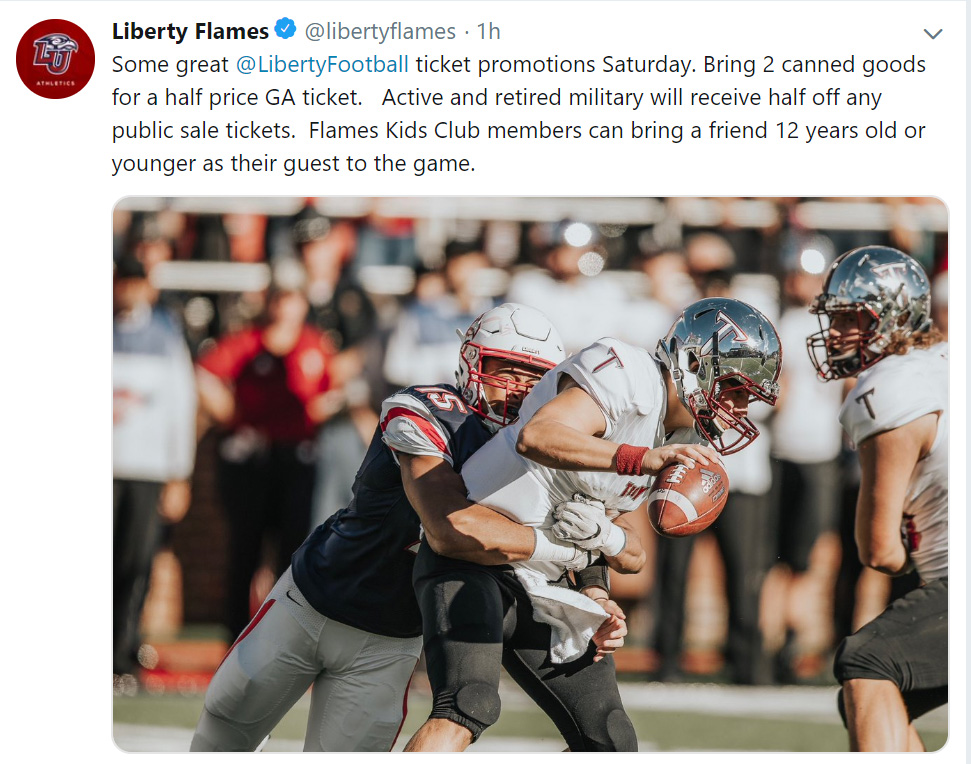 Saturday's Top Storylines
1. Liberty (4-6) begins a two-game season-ending homestand with its second matchup against New Mexico State (3-8) this season.
2. The Flames are looking to split the season series with the Aggies, pick up their first-ever victory over an FBS independent squad and halt a season-long three-game losing streak.
3. After being shut out at Auburn for the first time in 13 years, Liberty is preparing for a possible shootout with New Mexico State. The teams' first meeting (49-41 New Mexico State victory) saw 90 combined points and 1,085 total yards of offense, while both squads are allowing 40+ points per game this season.
4. WR Antonio Gandy-Golden appears on the Biletnikoff Award Watch List. He has recorded four 100-yard games this season, including a pair of 200-yard outings. The junior needs 96 receiving yards to wrap up back-to-back 1,000-yard seasons.
5. Gandy-Golden's classmate, QB Stephen Calvert, has thrown 62 career TD passes. He needs three more TDs to break Robby Justino's program career record. Calvert is one of four FBS junior QBs with over 8,000 career passing yards and 60 career passing TDs.
6. DE Jessie Lemonier has been outstanding in his first year with the Flames, racking up 9.0 sacks and 12.5 tackles for a loss. Six of his sacks have come in the last four weeks.

A Liberty Win Would ...
• Give the Flames a split of the two-game season series against New Mexico State.
• Mark the Flames' first-ever victory over an FBS independent opponent.
• Extend the Flames' home winning streak to three games and deal New Mexico State its fourth consecutive road defeat.
• Give the Flames a 5-1 all-time record in home games against opponents who have traveled 1,000+ miles, including a 2-1 mark in such games this season.
• Boost Turner Gill's head coaching record against New Mexico State to 2-1.
• Improve the Flames' all-time November record under Turner Gill to 17-8, thus halting a four-game November losing streak, dating back to last season.

Liberty and New Mexico State are meeting for the second time this season, following the Aggies' 49-41 home victory over the Flames on Oct. 6. This marks the first time the Flames have ever played the same opponent twice in a single season.

It is believed that the Flames and Aggies will be the first Division I football teams to match up twice within the same regular season since 1998, when UConn beat UMass on both Oct. 24 and Nov. 21.

Liberty and New Mexico State are also slated to meet twice in 2019, including Oct. 5 in Las Cruces and Nov. 30 in Lynchburg.