During the early stages of the 2018-19 season, Liberty Women's Basketball Head Coach Carey Green announced that high-scoring guard Asia Todd has signed a national letter of intent to attend Liberty University for the 2019-20 academic year.

Asia Todd (G, 5-9, Clayton, N.C.)
Todd, a senior at Clayton High School, is coming off an outstanding junior season. She averaged 29.0 points per game, headlined by a school single-game record 53-point outburst in a win over Garner.

Todd, who has already eclipsed the 1,000-point mark for her high school career, was named 2017-18 North Carolina High School OT Player of the Year and Greater Neuse River Conference Player of the Year. She was also an all-district and all-metro honoree. For the third straight season, Todd was named to the all-conference and all-academic squads.

"I signed with Liberty because I believe that this is where God has led me to spend the next four years of my life," Todd stated. "I can't wait to see what the next four years have in store for me. I am truly blessed to be afforded the opportunity to attend Liberty University." 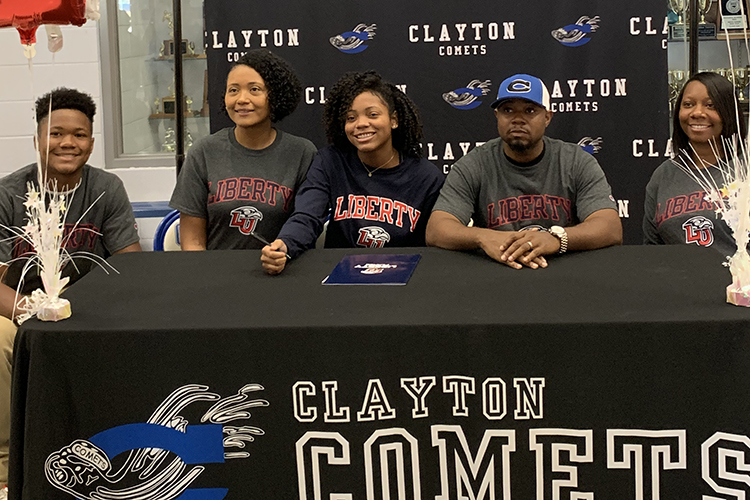 What They're Saying about Asia Todd
"Asia is an explosive scorer who can get points from all over the court, especially the foul line. She will add an offensive punch while being tenacious on the defensive end as well. We think her greatest attribute is her passion to win, excel and be inclusive to team play. We are always grateful to have a player who honors God with their best to join the Liberty family."
Carey Green, Liberty Head Women's Basketball Coach

"Asia Todd is one of the hardest-working players I have coached in my 20 years of coaching AAU. The kid can flat-out score and is also a great defender. I wish I could clone Asia! I am going to absolutely miss her, and I promise you that Liberty University just got a great PERSON. Congrats!"
Dorian Williams, Hoop Dreams Athletics Head Coach