Kennedi Williams (PG, 5-7, Douglasville, Ga.)
Williams, a senior at Greater Atlanta Christian School, is a preseason all-state selection in Georgia. During the last three seasons, she has led her team to a 67-23 record and three state Final Four appearances. A year ago, the Spartans were Georgia AAA state runners-up.

As a junior, Williams averaged 12.1 points, 7.0 assists and 4.0 steals per game, earning a spot on the all-state team. She ranked No. 3 in the state of Georgia for assists last season.

"When I went to visit Liberty, the minute I stepped on campus I felt a sense of home," Williams stated. "Also, I felt I could maximize my potential on and off the court and strengthen my faith with God."

Williams, who plays for the Hoop Dreams Athletics AAU program, chose Liberty over Kentucky, Coastal Carolina, College of Charleston and others. 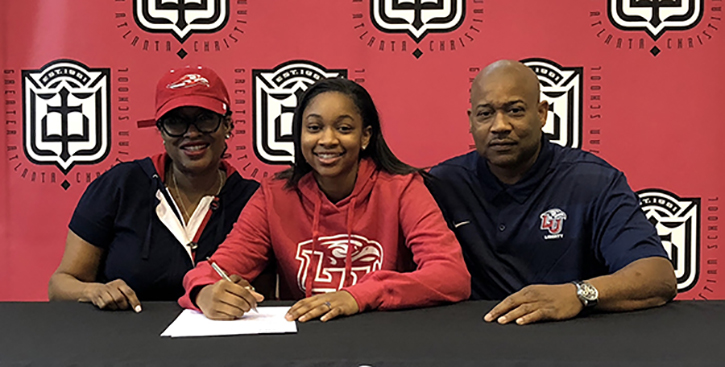 What They're Saying about Kennedi Williams
"Kennedi quickly caught our eye during the summer, flashing and attacking all over the court. She has all the tools of a true point guard who is well-coached in a very competitive metro Atlanta area. She rises to challenges daily. She has a complete game and displays great leadership and character. We are excited she chose to be a Liberty Flame."
Carey Green, Liberty Head Women's Basketball Coach

"I have played for 18 years in the WNBA and overseas and by far Kennedi "the Future" Williams has one of the best IQs in this game at such a young age! Basketball is just as strategic as athleticism and Future knows how to read a defense to perfection. She understands the angles on the court and she attacks them. She is truly a coach on the floor. She is a leader I am going to hate to lose. I wish I could bottle her up to stay with me always. She was a leader in eighth grade when I named her Future!"
Lady Grooms, Greater Atlanta Christian Head Girls' Basketball Coach

"Kennedi Williams is the true definition of a point guard. She is a pass-first floor general who looks to make everyone around her better. I can personally say that a player like Kennedi does not come through your doors often. Along with her floor leadership, she has the ability to score at will. I have personally never heard the kid complain! She is definitely a rare breed, and she will be dearly missed at Hoop Dreams Athletics."
Dorian Williams, Hoop Dreams Athletics Head Coach