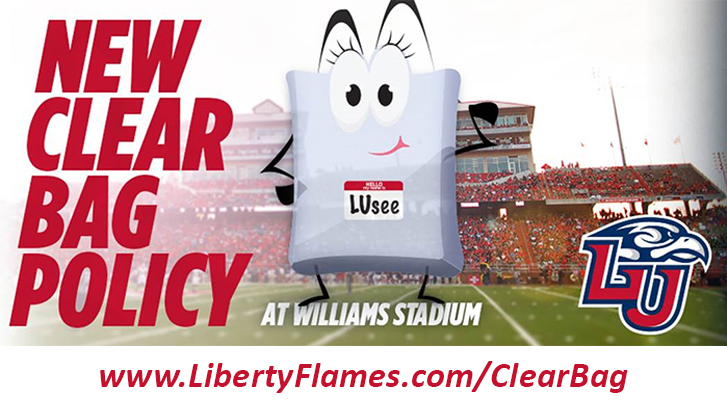 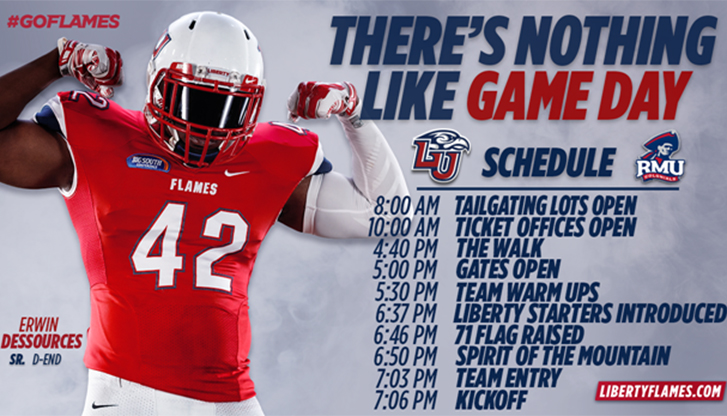 First and 10 – Saturday's Top Storylines
1. Liberty (1-3) will host Robert Morris (1-3) for both teams' final tune-up for conference play, Saturday at 7 p.m. at Williams Stadium.
2. Liberty is 1-1 all-time against the Colonials, losing at Robert Morris in 2010 and posting a home victory over the Colonials in 2011. The Flames have won all four home matchups with NEC opponents all-time, as noted in greater detail on page 3 of the game notes.
3. The Flames are looking to get back on track, following a road loss at SMU and a home setback to No. 3/4 Jacksonville State. Liberty has not lost three games in a row overall or dropped back-to-back home contests since September 2012. See page 4 of the game notes for more on what a Liberty victory would mean.
4. Despite seeing its six-game home winning streak halted last Saturday, Liberty is 20-6 at home under Turner Gill and 50-11 at Williams Stadium since the start of the 2006 season.
5. LB Nick Newman enters Saturday's game two tackles shy of 200 for his career, while DL JaRon Greene is four stops away from 100. See page 4 of the game notes for a list of milestones within reach on Saturday.
6. Coming off of a career-best nine-tackle, two-sack effort against Jacksonville State, JaRon Greene is in line to make his 30th career start on Saturday. See page 7 of the game notes for more information on Greene.
7. In each of the last three games, WR Dante' Shells has caught a TD pass and CB Tyrin Holloway has recorded an interception. See page 4 of the game notes for more information on their respective streaks.
8. The Liberty defense has forced 12 turnovers during the season's first four games, ranking No. 5 nationally. See page 5 of the game notes for more notes on the Flames' defensive unit.
9. Liberty is 1-0 this season and 19-1 under Turner Gill when holding its opponent under the 20-point mark. See page 7 of the game notes for more on "Liberty's record when ..."
10. The ability to run the ball will be key on Saturday. Liberty is 22-3 under Turner Gill (1-0 in 2016) when outrushing its opponent but only 8-19 under Gill (0-3 in 2016) when losing the rushing battle.

"4 Downs" with the Colonials
1 - Like Liberty, Robert Morris has opened the 2016 season with a 1-3 record. The Colonials picked up their first win of the year last Saturday by a 21-19 count over Malone. Robert Morris is seeking its first winning season since 2010, when the Colonials went 8-3, including a victory over Liberty, a NEC title and the team's first FCS Playoffs appearance.
2 - Liberty and Robert Morris have split their first two head-to-head meetings, with each team winning on its home field (RMU in 2010 and Liberty in 2011). Robert Morris has only had two head coaches during its 23 seasons of football. Joe Walton coached the team for 20 years and John Banaszak, a three-time Super Bowl champion for the Pittsburgh Steelers, is now in his third season at the helm. This will be the second straight week featuring a Big South-NEC clash. The Big South's Kennesaw State posted a 36-28 victory at defending NEC champion Duquesne a week ago.
3 - The Colonials are playing south of the Mason-Dixon line for the first time in three years. Their most recent visit to the South resulted in a 37-31 double OT win at VMI on Sept. 28, 2013.
4 - Freshman LB Gee Stanley ranks No. 4 nationally with 5.5 sacks through four games. Robert Morris has been up-and-down on special teams this season, missing all four of its FG tries but returning both a kickoff and punt for a TD.

Milestone Watch
1 - After recovering his fifth career fumble during the season opener at Virginia Tech, Erwin Dessources' next fumble recovery will move him into a tie for second place on Liberty's all-time list.
2 - Nick Newman is two tackles away from 200. The senior would become the first Flame with 200+ career stops since both Jacob Hagen and Nick Sigmon reached the milestone in 2014.
4/11 - At SMU, Dexter Robbins joined current Flames Nick Newman and Wesley Scott as members of the 100-tackle club. JaRon Greene and Tyrin Holloway are both nearing the century mark as well. Greene is four tackles shy of 100, while Holloway needs 11 stops to reach 100.
4a - Dante' Shells has hauled in a touchdown reception in each of the last three games. If he does so on Saturday, Shells would become the first Flame to catch a touchdown pass in four straight contests since Darrin Peterson (Nov. 1-22, 2014).
4b - Tyrin Holloway has intercepted a pass in three consecutive games. If he picks off a pass on Saturday, he would become the first Liberty player with an interception in four straight games since Jacob Hagen (Nov. 2-23, 2013).

A Liberty Win Would ...
• Give the Flames a 2-1 edge in the all-time head-to-head series with Robert Morris.
• Boost Liberty's record to 5-1 all-time against NEC opponents, including 5-0 in Lynchburg.
• Enable the Flames to avoid their first three-game losing streak since starting the 2012 season 0-4.
• Keep Liberty from suffering back-to-back home defeats for the first time since opening the 2012 home slate with losses to Norfolk State and Lehigh.
• Improve the team's record in home games under Turner Gill to 21-6.
• Give the Flames an all-time record of 106-47 at Williams Stadium in the team's 28 years of competition at the facility.
• Send Robert Morris to its fifth consecutive road defeat.