Once each signee's national letter of intent has cleared Liberty's Compliance office, an update will be posted to the @LibertyFlames and @LibertyFootball Twitter accounts.

Shortly thereafter, a full player bio will be posted to this webpage, along with a video package that contains player highlights and insight from a member of Liberty's coaching staff.

At the conclusion of National Signing Day, Liberty's Football program will celebrate its newest signing class with a Football Signing Day Event. The event, which is hosted by the Flames Club, start at 6 p.m. in the Williams Football Operations Center is free and open to the public. For more information about the event, please click here. 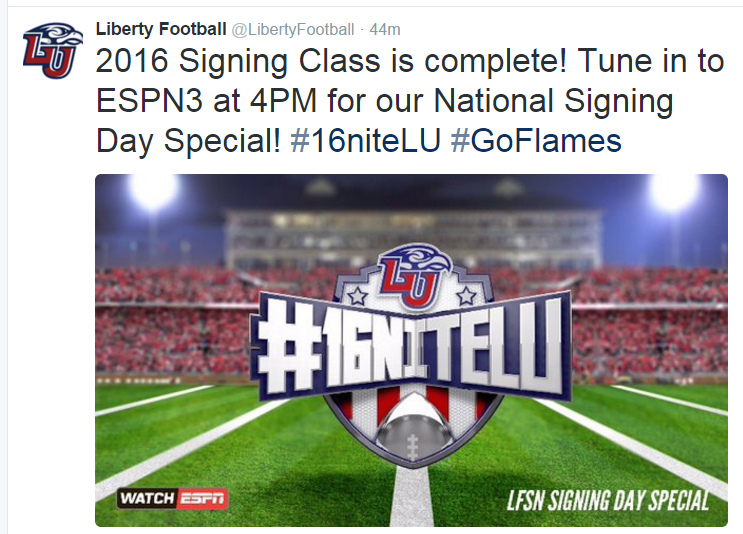 Note: You will need to refresh this page to get the latest updates throughout National Signing Day ... updated list as of 2:41 p.m.:

Jimmy Faulks, CB, 6-1, 175, St. Petersburg, Fla./Lakewood HS
Two-year varsity letterwinner from Lakewood High School in St. Petersburg, Fla. … threw for 353 yards and three touchdowns as a quarterback on the junior varsity team during his freshman season … played free safety as a sophomore, finishing the year with 52 tackles and a fumble recovery on the junior varsity team … 36 tackles and seven pass breakups during his first season of varsity play as a junior … finished his senior year with 54 tackles, four interceptions, including one returned for a touchdown … also plays baseball and runs track & field for Lakewood High School … son of Carleatha Walters.

Mitchell Lewis, RB, 6-0, 220, Auburn, Ala./Lee-Scott Academy
Four-year letterwinner at Lee-Scott Academy in Auburn, Ala. … rushed for 875 yards and 11 touchdowns on 168 carries as a junior, earning second-team all-area honors … finished his senior season at Lee-Scott Academy with 2,773 all-purpose yards and 34 touchdowns … rushed for 1,913 yards and 31 touchdowns on 217 carries … 120 receiving yards and a touchdown on nine receptions … 546 kickoff return yards and 154 punt return yards … also threw a 46-yard touchdown pass as a senior … named to the AISA All-Star team as a senior, while receiving first-team all-area honors … also participates in track & field … AISA state record holder in the discus … son of Brian and Tenley Lewis … father, Brian, was a letterwinning football player at Colorado … interested in pursuing an exercise science major at Liberty.

Julio Lozano, OL, 6-4, 270, Bellaire, Texas/Bellaire HS (Kilgore College)
Transferring to Liberty following one season of play at Kilgore College in Kilgore, Texas … helped the Rangers post a 7-5 record and win the 2015 SWJCFC Championship … played high school football at Bellaire High School in Bellaire, Texas … played defensive end during his senior campaign, finishing the year with 44 tackles, 13.0 tackles for a loss, 2.5 sacks and a forced fumble … all-district second-team honoree as a senior … son of Ana Hernandez … would like to pursue a sports business degree at Liberty and work as an agent after graduation.

Solomon McGinty, S, 6-1, 210, Navasota, Texas/Navasota HS (Tyler JC)
Transferring to Liberty from Tyler Junior College in Tyler, Texas … played two seasons at Tyler Junior College, helping the Apaches advance to the semifinals of the SWJCFC Playoffs in 2015 … finished his final season at Tyler Junior College with 57 tackles and two interceptions, while earning second-team all-conference honors … three-year letterwinner Navasota High School in Navasota, Texas … played both wide receiver and linebacker during his junior and senior seasons … earned all-state honors as a wide receiver and honorable mention all-state honors as a linebacker during his final two seasons at Navasota High School … 1,342 receiving yards and 20 touchdowns on 70 receptions as a junior … finished his senior season with 1,789 receiving yards on 89 catches with 22 touchdowns … also played basketball and baseball at Navasota High School … son of Solomon McGinty and Deella Williams … has a strong football history in his family, as his uncle, Lynn James, played for the Cincinnati Bengals (1990-91) and Cleveland Browns (1991) and his cousin, Marcus Maxey, played for the Kansas City Chiefs and Chicago Bears in 2006 … is planning on majoring in criminal justice at Liberty.

Alex Probert, K, 5-9, 170, Andover, Minn./Andover HS
Four-year letterwinner from Andover High School in Andover, Minn. … finished his sophomore season averaging 68.5 yards per kickoff … set a school record with a 46-yard field goal as a sophomore … 79 percent of his kickoffs as a junior resulted in a touchback … finished his junior season with the highest kickoff average in the state of Minnesota … averaged 38.8 yards per punt as a junior, including a 72-yard punt … named the NWSCS Special Teams Player of the Year as a junior … West Metro Special Teams Player of the Year as a senior … 80 percent of his kickoffs as a senior resulted in a touchback (40-of-50) … also ran track & field for three years … son of Rich and Linda Probert … would like to pursue a business degree at Liberty and work in business management after graduation.