Sadalia Ellis and the Lady Flames recorded a 51-16 triumph over Jordan on Friday.

The Lady Flames improved to 2-0 and captured the Friendship Games Group B title with a 51-16 victory over Jordan this morning in Eilat. Liberty's new graduate assistant, Joyous Tharrington, introduces herself to Lady Flames fans and recaps today's game.

Before I begin, it may be helpful if I first introduce myself, seeing as how I am probably unknown to most of you. My name is Joyous Tharrington and I will be the new graduate assistant in the fall, taking over for Antwaun Stuart. I graduated from George Mason University in 2013 where I played basketball and discovered my desire to coach! I am grateful to be in an atmosphere where sport and faith are combined.  Growing up in Lynchburg, I am more than familiar with the tradition of the Lady Flames and itched to see every Midnight Madness. I remember Katie Feenstra and  the Sweet 16 trip, countless championships, and witnessing Megan Frazee and Avery Warley make it to the WNBA. Most of all, I watched as one of my best friends and coaches here, Brittany (Campbell) Hoyt, has developed into a woman of God at LU.  Needless to say, it is an honor to be here and I am blessed to have this opportunity.

Today's Game
We won, 51-16. Today the girls played against a team from Jordan and looked like they were thoroughly enjoying themselves.  While cultural differences may play a small role off the court, basketball is the same all over the world (well technically the rules vary but you get my point). The Friendship Games show why sports are so beneficial, as it creates an automatic commonality between people. As I captured moments between the girls on and off the court because I have the video camera attached to my hand, it is apparent the Friendship Games are accomplishing what it set out to. I observe as the players go watch other teams play, watch the World Cup with new friends and take selfies randomly in the lobby. These are the moments they will remember and cherish for a lifetime, and I am just happy to be a part of it.

For me, this trip has been confirmation that God has a plan for us. Not one player, coach or staffer is here in Israel by accident.  It's more than seeing the Bible coming alive. It's bigger than walking where Jesus walked or even playing basketball games in an effort to better relations among nations.  It is a divine appointment, set long ago. As we move on to the semifinals tomorrow and to some cultural activities for the girls in the late afternoon, I am confident friendships with the other teams here will continue to grow, which is the whole point. 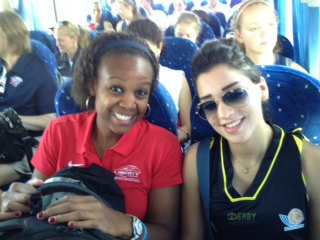 Liberty will play a semifinal contest Saturday at 11:30 a.m. Israel (4:30 a.m. Eastern) against either Germany, Nazareth or ASA Tel Aviv. If the Lady Flames win, they will move on to Monday's championship game of the 2014 Friendship Games. 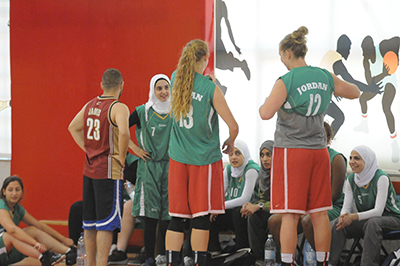 In 3rd @LibertyWBB leads 37-6 and have stopped the game to loan Ashley and Katelyn to the other team but the officials wouldn't allow it.

Earlier in the trip the team ran into Coach Paul Westhead and he told us that he taught Charles Barkley... http://t.co/DT1cz6cnHu