Landing an aerial flip after skiing or snowboarding off of Liberty Mountain Snowflex Centre's (LMSC) highest chute and largest jump requires an equivalent amount of discipline and repetition as learning how to effectively share one's faith.

"Skiing and snowboarding is a sport that very much relies on confidence, and where does that confidence come from?" Gibson asked those in attendance for a devotional he led Wednesday night in the Snowflex lodge. "It comes from repetition, to have the confidence and faith to be able to perform these different tricks. So much of faith in Jesus and having confidence to go and share with people what you believe without fear is being firm in what you stand for, what you believe in, what Jesus has done. That comes from knowing His Word."

On the slopes, riders and skiers practice their stunts and tricks on Snowflex's aerial awareness trampoline and into its 50-by-50-by-11-foot Bagjump air bag before taking those skills to the jumps on LMSC's synthetic surfaces. On Thursday morning, Gibson watched snowboarder Levi Rogers land a back flip for the first time on Snowflex after he had practiced it on the air bag the night before. Earlier in the morning, skier Luke Thrasher twice performed a double front flip on the Big Air jump with tremendous confidence and skillful execution.

"The whole idea is to do it a few times and get comfortable and then take it to the slopes," Gibson said. "(Rogers has) been coming to the camp about three years now. He has always had a great mentality and always been a go-getter and not afraid to try tricks, so that along with good coaching definitely has had some really great progression."

Gibson said Liberty does not overtly advertise its Next Level Camps as being Christian, but he and his staff make the most of the opportunities to share their faith through optional Bible studies held each evening.

"Some of (the campers) come from Christian backgrounds and some of them are hearing the Gospel for the first time," Gibson said, noting that about 70 percent of the 55 campers were returning from previous years, while the majority of the 25 staff on hand have served over multiple summers.

Michael Anwar, regional director of Snowboarders & Skiers For Christ's Northwest USA headquarters in Spokane, Wash., returned for the seventh year in a row to serve as a Next Level camp counselor. Despite having cerebral palsy, he has not let that define him, leaning on the Lord as he pursues his passions for snowboarding, cycling, and encouraging others. Anwar delivered an inspirational message during Monday night's devotion, challenging participants to find their edge in Jesus, who will give them direction in life.

At Liberty, Gibson and his staff encourage the Flames' skiers and riders to be evangelistic in their outreach to the ski & snowboard community, which is predominantly secular.

"Whether it's here at Snowflex or when our team is going around to different mountains, it is definitely a really cool way to be able to connect with people and use the platform to share about Jesus."

He said in order to be successful in fulfilling the Great Commission found in Matthew 28:19-20, it is absolutely necessary to first spend time in prayer and fellowship with God, to read and understand the Bible and hiding His Scriptures in one's heart.

"A huge part of evangelism and talking to people is the Holy Spirit working through us and interceding on our behalf," Gibson said. "We also have to do our part in knowing who Jesus is and memorizing His Word because He has called us to do that."

He admitted his own trepidation at sharing his faith, which he has overcome over the years by trusting in the Holy Spirit to speak through him.

"I definitely don't tell people about Jesus as much as I should," Gibson said. "If we genuinely love Jesus and we believe in His Word and want to live our lives to glorify Him, then we should care to tell people about Him. A lot of that (hesitation) comes from just a lack of confidence in our faith."

He said it is easy for believers to become stagnant in their spiritual walk after deciding to follow Jesus without making a commitment to meet with Him daily and constantly seek His will through prayer.

He is thrilled to see campers put their trust in Jesus for the first time and even go on to become camp counselors and instructors, sharing their passion for the sport and love of Christ with future participants.

"Being involved in the camp for nine years now, one thing I've started seeing is campers becoming staff members," Gibson said. "It's so cool to see that growth and that transition, going from being the one that's being served to flipping the role and serving the campers."

He said a distinguishing characteristic of the staff members hired to serve at Liberty's camps is their humility and excitement over seeing the youth progress on the slopes while growing in their faith.

"Most mountains you go to, the best riders in the park generally aren't going to be super outgoing to beginners and wanting to help coach them," he said. "So being able to use the facility here and to flip that to where most of the time the best riders that we have here are wanting to help the beginners and give tips and be interactive with them … and change the dynamic, it makes for a really cool atmosphere and environment for growth and progression — not just in ski and snowboard tricks, but overall in faith." 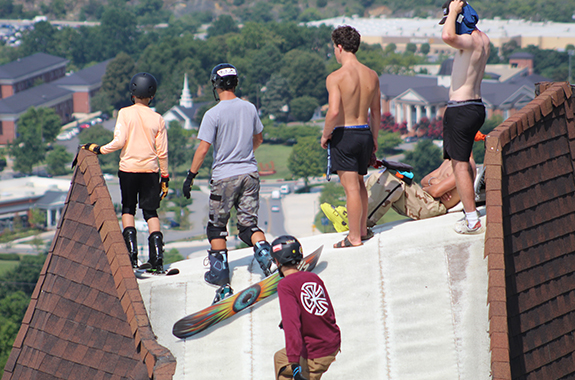 Campers peer over the highest chute at Snowflex with Liberty's Prayer Chapel in the background.