Skiers, snowboarders set to soar at USCSA Nationals in Ore.

Depth of talent could give Liberty University's men's ski & snowboard team an edge in next week's United States Collegiate Ski & Snowboard Association (USCSA) National Championships at Mt. Bachelor, where more than 500 athletes from around the country will compete for gold, silver, and bronze medals in alpine and freestyle events.

Competition starts for the Flames with the Rail Jam on Tuesday followed by Slopestyle on Wednesday and Boardercross and Skiercross on Thursday with live webcasts available online.

"We have one of the strongest teams we've ever had since I've taken over as head coach (in 2014)," Leeds said. "Were looking to do extremely well in the Rail Jam event and I think we'll have a better showing in the Slopestyle event than we've had in recent years."

At last season's USCSA National Championships held at Lake Placid, N.Y., the Flames' snowboard team landed on the podium twice with their third consecutive top-three finish in the Rail Jam and also placed third for the second year in a row in the Slopestyle competition. Liberty's men's ski team finished fifth in the Rail Jam last year.

Due to an unseasonably warm winter in the Mid-Atlantic, Liberty hasn't had an opportunity to race in the Boardercross or Skiercross events this season.

"We'll have a crash course on how to approach gates when we get there, and hopefully that will translate into some good qualifying times," Leeds said, noting that, depending on the size of the field, the top 30 times usually advance to a series of qualifying races with the winners advancing to a four-man final.

Overall, riders from schools out West will have a home mountain advantage on the Flames, who have relied on the Liberty Mountain Snowflex Centre as their home base. That's why Leeds is flying his team out three days early — to allow them to adjust to the higher altitude as well as to practice on larger jumps, landing on real snow.

"We'll be competing against a lot of schools that have had way better conditions and much bigger jumps to train on," he said. "They've been getting a ton of snow and we've had some of the worst riding conditions ever on the East Coast. A lot of our area resorts are really suffering. The good thing for us is we have Snowflex, which allows us to maintain our skills and develop our tricks year-round, regardless of the weather."

Perennial USCSA contenders include Sierra Nevada, Westminster, Western Colorado, and Colorado Boulder, with Vermont and Virginia two of the only challengers besides Liberty from the East Coast.

Nationals will be the last collegiate competition for Hoff and McHugh, two of the most talented snowboarders in the seven-year history of the program.

"Those two, as well as guys like Austin Santos, have been on the team for a while, so they know what to expect and have been kind of hungry and ready to compete," Leeds said. "As far as our skiers go, Isaac Shepard, Jonathan Wong, Cole Kees and freshman John Hunt have the potential to do extremely well. It just comes down to if they land their jumps." 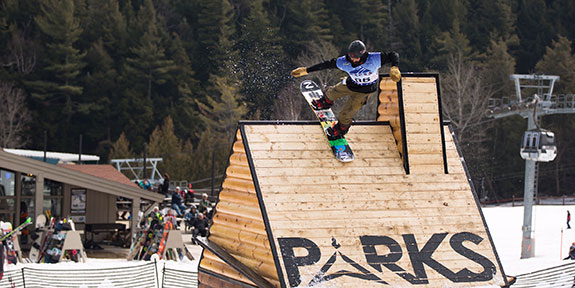 Liberty's Austin Santos competes in the Rail Jam at the 2016 USCSA nationals at Lake Placid, N.Y.