The Flames and Lady Flames totaled 1,340 points to take second place behind only Hillsdale (Mich.) College (1,350) and ahead of third-place Texas (1,325) in a field of 20 Division 3 college and university programs.

“This is the best showing we’ve ever had,” Flames and Lady Flames second-year Head Coach Roger Johnson said. “We were quite proud to be able to bring home so many awards from the biggest stage for our discipline. It’s a sign of what’s to come from this program and we are very excited that we’re going to continue to build upon this next year. We need to maintain our preparedness for a heavy competition year starting this fall with COVID lightening up.”

Individually, sophomore Austin Applegarth was honored for his third-place Super Sporting Clays showing in the Men’s Open class, the highest classification level for most advanced shooters, with a score of 94, which tied with Schreiner’s Garrett LeJeune and trailed only Martin Methodist’s Lonnie Dillard III’s 97.

Freshman Ethan Goodman, competing in his first national-level championship event, claimed first place in Class B for Sporting Clays with his 77.

“We did have a handful of shooters that had been there before, and others (like Goodman) who competed locally, practiced in a competitive setting, and helped us prepare and secure a podium position,” Johnson said. “Given the conditions, the weather, and complexity of targets presented, our team members stayed diligent, focused, and mentally together to execute at a high level. The rewards won were a reflection of all of that hard work and effort in preparation.”

Based on its top five shooters, Liberty finished first in the Sporting Clays competition with 375 points, edging Hillsdale (372) and Texas (367).

“That is the most advanced, most complex event and we won it hands down, winning by three targets,” Johnson said. 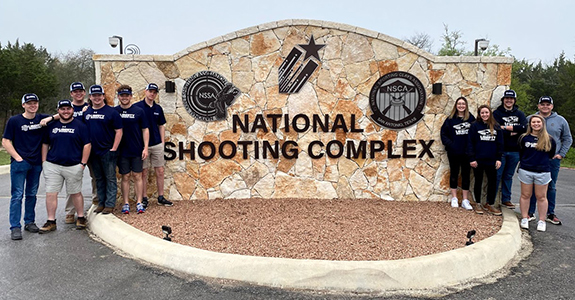