In Iron Rifle, the three Liberty squads swept the first, second, and third positions. Individually, Liberty shooters finished first through 10th without allowing any other individual to place in the top 10. Freshman Katy Allen and senior co-captain Andersen Bennett were extremely fast, being the only two shooters to break the 40-second total time standard.

In Optic Rifle, Liberty chose to field only one squad due to limited time but did manage to take second place of the four teams competing in that category. Freshman Cami Barshinger led the squad with another sub-40-second run, finishing at 38.24 seconds.

Rimfire Pistol was a strongly contested category, but once again the Flames came out on top. With a strong field of 11 teams, Liberty’s “Blue” and “Red” squads finished first and second, respectively, a full 14 seconds ahead of the third-place team. Individual standouts were Bennett, shooting the fastest time of the day at 40.90 seconds to beat out 43 other shooters. Another great time was produced by the other co-captain, junior Sam Verdoorn, finishing just seconds behind Bennett. Freshman Caleb Clinton, junior Jacob Beebe, Allen, and junior Caden Wilburn also shot fantastically well with pistols, all completing their rounds in under 51 seconds.

Finally, Liberty fielded a squad in the PCC class. The team came out on top, led by strong showings from all four shooters: junior Christian Morgan, Barshinger, graduate Connelly Weems, and freshman Jessica Doiron. The squad’s time rivaled that of last year’s national championship-winning time, which bodes well for this season’s competition, again set for mid-March in Talladega, Ala.

Other Flames newcomers made their marks in their first competition as well, with freshmen Zachary Larsen and Gabe Goodman both managing top-10 individual showings in the always competitive Rimfire Rifle Iron sights discipline, and Larsen also grabbing a top-five finish in Rimfire Rifle Optic sights.

“The team never ceases to amaze me,” Liberty Head Coach Bill Crawford said, noting that during slow times, team members helped other squads by painting targets between shooters, helping to organize needed alterations to the range as night fell, and representing Liberty in the best possible ways. “I have never coached a group so dedicated to the betterment of the sport, and one another.” 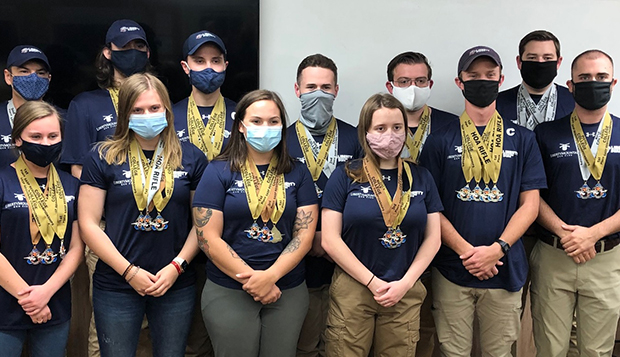