Sophomore Kristen Gagne earned an individual bronze medal by shooting 564 in smallbore and Liberty University’s rifle team placed third as a team in that division with 2,163 points from its five-shooter team at the American Smallbore Shooting Association (ASSA) 2021 Intercollegiate Rifle Club National Championships held over the weekend at the X-Count shooting range in Fort Wayne, Ind.

Gagne was joined by sophomore Michael Donoho, who shot a 560, freshman Madeline Ashley, who fired a personal best 533, freshman Wyatt Campos (personal-best 506), and junior Katherine Gray, whose fifth-place score did not factor into the team total.

Donoho and Gagne represented Liberty on both the ASSA All-Star 3-position smallbore and air rifle first teams, based on their average scores between the championship competition and their two highest scores fired during the regular season in a sanctioned competition. 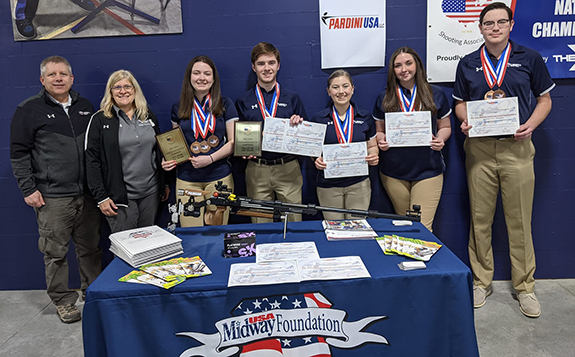