Senior Cole Loomis is back from an ankle injury that sidelined him last season to win the skier Rail Jam. (Photos by Chase Gyles)

Close to 20 skiers and snowboarders and nearly 100 spectators turned out for Friday night's first of three events scheduled at the Liberty Mountain Snowflex Centre this fall, a Rail Jam with three levels of difficulty set up on the freestyle terrain park.

"It was a great time and I was pleasantly surprised by how many spectators we had up there," said Flames ski & snowboard Head Coach Isaac Gibson, who is planning a Big Air competition on Oct. 24 and a Slopestyle event on Nov. 14. "Quite a few of our athletes were out of town for this weekend and unable to compete, so hopefully even more of our team will compete in the Big Air, which is the most fun spectator's event for us. That will be even more fun for students to come to hang out and watch."

Skiers and riders in Friday's Rail Jam were judged — by Lady Flames Assistant Coach Jessica Woody, Gibson's wife, and former Flames competitors Payton Fedako and John Hunt, now an assistant coach himself — on overall impression based on style, consistency, diversity, creativity, and difficulty of tricks completed in a 10-minute period.

For Loomis, it was his first competition since severely injuring his ankle before the first USCSA competition last season.

"He was able to put down quite a few tricks and land in the first-place position," Gibson said. "We're excited to have him back and the ski team is definitely looking really solid, maybe slightly more skilled than the snowboard team as a whole, but not by much."

Outsiders occupied the top two spots in the men's snowboard competition, won by Matt Hylton from Blacksburg, Va., who has trained at Snowflex throughout the years before moving out to Colorado.

Noah Alston, an instructor at Snowflex who is taking classes at nearby Central Virginia Community College (CVCC), placed second, followed by junior Tyler Sherbine in third.

The Slopestyle contest on Nov. 14 will require more complicated judging based on skiers' and riders' performance tricks on multiple rail features and one jump.

"It will be very beneficial for them to be able to put together a run where they have to do multiple rail hits in a row, to try to put together runs that are realistic to land with their skill levels, but also score well," Gibson said. "That is why we do the contest series in the fall to attract other outside skiers and snowboarders to provide practice opportunities in a real contest setting here at Liberty."

The Flames and Lady Flames are in the midst of a month-long tryout process with the travel roster expected to be finalized in early November.

"It has been an ongoing process for us, as we usually try to take the fall semester to hold practices and watch new students develop to give them a shot to show us their full potential," Gibson said. "If they don't make the travel team, they are still very much able to continue participating on the development side, hopefully building up what it takes to join the travel team in the future."

A record 10 female snowboarders and six female skiers are trying out, prompting Gibson to consider expanding that travel roster from six to eight (from three to four of each). On the men's side, 13 snowboarders and 11 skiers are contending for 12 total spots (six of each).

Gibson is proceeding with realistic expectation of a USCSA Southeast Conference season this winter, with a potential USCSA contest Feb. 13-14 at Snowflex leading up to the Feb. 19-20 Mid-Atlantic Regional Championships at Wintergreen Resort, Liberty's real-snow training base, and the March 7-13 USCSA National Championships at Mammoth Mountain, Calif., near Yosemite National Park.

"The next thing you know, we are going to be hitting the snow and getting into the regular season," he said, noting that skiing and snowboarding are conducive to social distancing in the midst of a pandemic. "It is really helpful that it is an outdoor, non-contact sport and (athletes are) already wearing gloves, goggles, and masks. We are all looking forward to the winter and hoping we get a lot of snow." 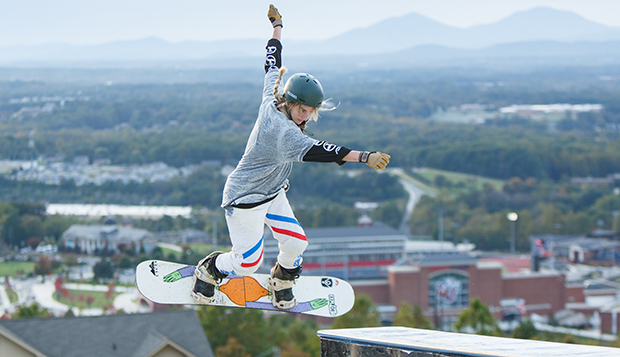