In 2018, when Mike Zumpano and fellow Liberty University men's lacrosse Assistant Coach Brett Bernardo traveled to Israel with a few of the Flames for the Federation of International Lacrosse (FIL) World Championships, he met Vova Demediuk, president of the Ukraine Lacrosse Federation and an international leader for FCA Lacrosse since 2015.

Dan Britton, FCA's executive director of international ministry who has had two daughters, a son (Eli, '20), a nephew (Caleb Britton, '21), and a niece play lacrosse at Liberty, told Zumpano how Demediuk has helped grow the sport and use it as a platform to share the Gospel in Ukraine. On that trip, Liberty donated enough cleats, elbow pads, and gloves to outfit 10 players in Ukraine, which became the 62nd member of the FIL in 2017.

This week, Demediuk visited Liberty's campus for the first time to see its spectacular facilities firsthand and strengthen relationships with the Flames' coaching staff before traveling to meet FCA chapter representatives in Charlotte, N.C., Atlanta, Austin, Texas, and Baltimore. Zumpano shipped 35-40 helmets used by the Flames over the past three years to Ukraine on Thursday morning.

"We're outreaching globally to organizations and we are hoping to continue to cultivate a relationship with FCA Lacrosse in Ukraine in the coming years, starting with small steps of making connections," Zumpano said. "We're willing to support Vova however we can. Donating helmets can be a big help to them for building up the level of competition and offering them credibility. When he talks to people that want to join, they can see they're supported not only by FCA, but by a college program in the United States."

Demediuk established FCA Lacrosse in Ukraine in 2010 and the organization now has close to 100 players at all levels, including approximately 60 youth and 40 adults eligible for international competition.

Demediuk said recently God opened his mind and heart to help start a new program through FCA Lacrosse in Ukraine to serve athletes with disabilities, with the potential for more than 300 youth to learn the game and hear the Gospel message.

Zumpano said he and Liberty Head Coach Kyle McQuillan are tentatively planning to send the Flames on a lacrosse outreach/sports mission trip to Ukraine in the near future.

"Recently they've seen a lot of growth and benefit of inviting American groups over to Ukraine, which opens doors that aren't open by themselves," Zumpano said. "We had a plan to have a trip organized back in 2019, but that fell through because Ukraine was in a red zone, in a war state. We are hoping to go over there in the next year or two, either in January or the summertime when they are doing camps."

To that end, Zumpano introduced Demediuk to Club Sports Spiritual Development Assistant Brian Davidson, who joined the Flames DI men's hockey team on its trip to Finland in early 2020. He has previously served in sports ministry in Ukraine, working with Liberty alumnus Tom Merchant ('93) in a Christian soccer organization.

Demediuk enjoyed his visit to Liberty and the opportunity to develop his friendship with Zumpano and others on campus.

"I feel he has a good heart and has been a friend during the last couple years, praying and dreaming about the future of FCA Lacrosse in Ukraine," Demediuk said. "Growing relationships is so important for us. We want to share our vision with the guys and to let them be a part of this vision. Our desire is to bring people hope and to use lacrosse as a way to share the Gospel."

He recounted the Ukrainian team having the opportunity to prepare the Russia National team for its next match at the 2018 World Championships.

"I speak Russian so after our scrimmage, I could share why we were in Israel (with FCA Lacrosse), to pray for and bless a lot of teams in the championships," Demediuk said. "When we prayed, it was special. I told them I hate what Russia does (invading Ukraine), but I love them as people and the Holy Spirit really touched their hearts."

Liberty has also provided support to Puerto Rico's fledgling program, headed up by former Flames players Nathan Lowmaster and Miguel Lozada, helping it to become the 56th FIL member nation in 2017. The FIL now has teams in 75 nations and men's lacrosse is set to be introduced as a provisional Olympic sport at the 2024 Summer Games in Paris before becoming official in 2028 in Los Angeles. Demediuk is hopeful of seeing his team qualify for those Games after potentially competing at the World Championships, also to be held in Los Angeles, in 2022. 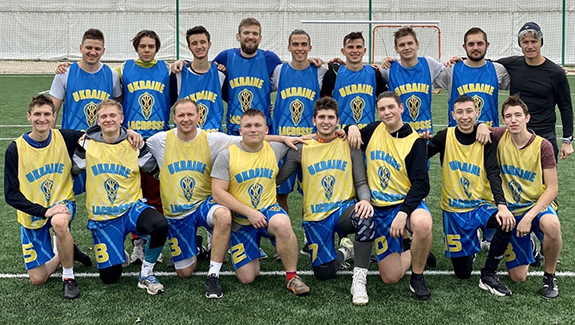 Members of the Ukraine National Team, including Vova Demediuk (third from left in front row) were
coached by FCA's executive director of International Ministry Dan Britton (top right) in Israel in 2018.