"They celebrated by dumping bottles of water on me just like a football coach," Flames first-year Head Coach Ian Rigney said. "They were ecstatic. The whole team went crazy. It had been so long since we had won a national title, especially a team title. They couldn't be happier. They were nervous going into the competition, but when they took the podium, they all had the biggest smiles on their faces I have ever seen. All their nerves went away when they were crowned the champions."

Rigney was part of Liberty's last team to capture a national title — in men's compound in 2012, when he also earned an individual crown in that discipline. He later added three more national trophies to his quiver.

"It feels great to see such a young group of guys win," Rigney said. "We will have Spencer for two more years and Louis for another three years, so there is still a lot of potential there. What I prayed for was to be able to win a national title as a shooter and now to win it as a coach, too, was a dream come true."

It was a record-setting tournament with 86 more shooters than last year — a total of 240 in all from 23 colleges and universities across the country.

"The level of competition was much higher than in previous years," Rigney said. "We were shooting against the best of the best and the men's bowhunter class was the most competitive at this event with 62 archers shooting in Saturday's individual competition."

Liberty's closest competitor in men's bowhunting was tournament host Southeastern Illinois College, which eliminated the University of the Cumberlands in the semifinal round. The Flames needed to go to a sudden-death tie-breaker match to advance past Hocking College in their semifinal round of competition after the two teams fired rounds of 276 in regulation. Liberty edged the Hawks, 96-90, to move into the final round, where it defeated Southeastern Illinois, 286-278.

"The team competition was on a completely different venue than the individual rounds, out in a field instead of in the woods," Rigney said. "They shot three rounds at three targets of unknown distances. What we have on campus (a 3D outdoor course set up near the Liberty Equestrian Center) was perfect for what we saw out here and it got them ready for it. I am very pleased with the facility that we have, which is very comparable to what we saw this weekend."

Individually on Saturday, Foster finished fifth out of 62 men's bowhunters.

"They had a very strong day," Rigney said, noting that Martin also shot well individually in the women's barebow class but only finished in the middle of the pack against tough competition. "Most of our women's shooters were new and had never seen anything like this atmosphere, so I couldn't be happier about the way they shot."

Liberty lost its silver-medal match by a 115-113 margin to Hocking, which went on to defeat Blue Mountain College in the gold-medal round.

The Lady Flames also made the most of their opportunities to share their faith, both at their hotel where Martin and Katherine Agnew prayed with a couple over breakfast, and at the competition, where Agnew prayed with one of her competitors in the women's Olympic recurve category to help her overcome anxiety and give her a sense of calm.

"I was ecstatic that they are focused not only on shooting, but also being a light in this world and the archery community," Rigney said. "My biggest thing and my goal as a coach is to not only win national titles, but to win other people to Jesus." 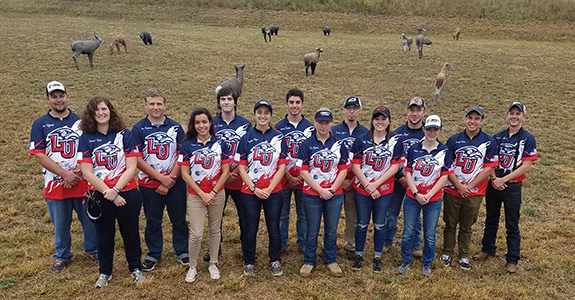