Members and coaches of Liberty’s wrestling team pose with their runner-up plague after placing second to Emmanuel at the NCWA National Duals, Jan. 28 in the LaHaye Ice Center.

Ferenczy, who finished runner-up at last year's nationals and eclipsed the 100-win milestone during the Mid-Atlantic Collegiate (MAC) championships, capped his stellar career with a 6-2 decision over Penn State Monto Alto's Clay Kocsis in the final, fueling the Flames to a second-place team finish.

After the official raised his arm in victory, Ferenczy celebrated by bending his knee on the center of the mat and popping the question to Turner, a graduate student and second-year team manager, who said "Yes."

The former Hawaii high school girls state champion is the daughter of former Flames wrestler Randy Manley ('87), who competed for Liberty in the mid-1980s when Castro was a graduate assistant and is now a missionary on the Hawaiian island of Molokai.

She defeated Richland's Alexis Sauceda by fall in the championship bout, needing 6 minutes, 16 seconds to put her away. Liberty Assistant Coach Allen Hackmann and Josh Travers, a 2016 graduate and volunteer assistant, coached in her corner.

Manley, Liberty's only women's representative, boosted the Lady Flames (15) to a ninth-place showing in the team standings, won by Southwestern Oregon (97.5 points), which had four national champions.

"There were only six girls in her weight class and she won both of her matches," Castro said, noting that Manley received a first-round bye before winning a 16-4 major decision over Northern Kentucky's Jewell Morgan in the semifinals. "In the final, she came from behind in the third period and started dominating and actually pinned the girl. She did a great job."

Manley wrestled exhibition matches in both the NCWA National Duals and the Mid-Atlantic Conference (MAC) tournaments, hosted by Liberty.

"Liberty Club Sports Athletic Director Kirk Handy let us train and have a couple girls compete with us," Castro said, noting women's wrestling is not an official Club Sport. "This is the pilot year in that he let us enter her in the national tournament."

Ferenczy, who entered the national tournament as the Flames' only No. 1 seed and was their only finalist, concluded his season with a 33-5 record by winning the final bout in dramatic fashion.

"He wrestled it like a chess match," Castro said. "He had a game plan and he followed it to perfection. We wanted him to keep the match to a low score because (Kocsis) is a technical wrestler."

It was tied at 1-1 going into the third period, when Ferenczy capitalized as Kocsis began to show signs of fatigue.

"Once he got on top, Josh controlled the match," Castro said, noting that it was similar to his semifinal against Air Force Prep's Trace Carello, a low-scoring match until Ferenczy turned and pinned his opponent late in the third period. "That was key, too."

Ferenczy's victory in the finals helped the Flames clinch their third runner-up team finish in six seasons at the NCWA level, after claiming the national championship in 2015.

"Central Florida was nibbling at our heels the whole tournament," Castro said. "At one point (after Friday's second-day action), they were within 4.5 points of us, and they put three in the finals and we only had one. We had a few more in the consolation bracket, but Josh nailed the second-place team finish after he put his match away."

Liberty started the tournament on Thursday with 23 bonus points based on its second-place showing at the NCWA National Duals, which it hosted for the first time in late January. The Flames also finished runner-up to Emmanuel in that tournament, which awarded the Lions 24 bonus points.

Emmanuel wouldn't need them, however, as the defending champions had four finalists and seven top-three place-winners to run away with the team title with 233.5 points.

Liberty clinched second place with 155.5 points on the strength of its seven All-Americans, based on top-eight finishes — second most to Emmanuel's nine. The Flames held off third-place Central Florida (141 points) and fourth-place Grand Valley State (137.5), which both had six All-American finishes. UCF and Grand Valley took second and third behind Emmanuel last year, when Liberty posted its fifth consecutive top-four team finish.

Taylor Westlake, the Flames' sophomore co-captain, won his 184-pound consolation semifinal match by 14-2 major decision over Grand Valley State's Ak Khatib to advance to the third-place final against Maine's River Robertson. There, he lost a 6-0 decision to finish fourth.

"For him to do what he did, to earn national All-American status, is a great story in itself," Castro said. "He came to us last year so green in the sport but trained extremely hard and won a conference championship for us."

Liberty sophomore heavyweight Dominick Johnson, who won his first consolation match over Grays Harbor's Joe Leal, by fall in 4:18, on Friday night, then pinned Emmanuel's Kenny Mason in 5:47 to reach the consolation semifinals, where he dropped a 7-3 decision to Utah State's Dylan Stadel to slip into the fifth-place final. There, Johnson held on for a 2-0 triumph over South Carolina's Zachary Boyda to account for the Flames' final team points.

Flames sophomore Brandon Robinson, who won a 10-4 decision over Akron's Isaac Hammonds in the 149-pound consolation semis, lost a 3-1 decision to Grand Valley State's Dylon Dwyer (39-2) in the third-place final. Also at 149 pounds, Flames senior Ike Podell, a 2015 All-American, finished 2-3 and was eliminated one bout before the medal rounds, dropping a 5-3 decision to South Carolina's Jackson Myers in a rematch of their MAC semifinal.

Richard Cerebe won his first 165-pound consolation match by 8-2 decision over Penn State DuBois' John Prentice on Friday night before advancing to the consolation semifinals with a 2-1 win over Grays Harbor's James Jones. He then dropped a 6-0 decision to Florida's Trace Thome to slip to the seventh-place final, which he lost to Mott Community College's Noah Kinne, 7-4. 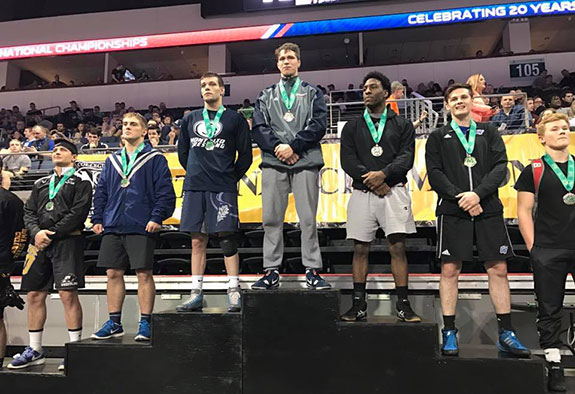