Seven players and coaches with Liberty University men's lacrosse connections are involved in the 2018 Federation of International Lacrosse (FIL) World Championships, which start today and run through next Saturday in Netanya, Israel.

While Flames alumni and co-founders Nathan Lowmaster and Miguel Lozada are leading Puerto Rico Lacrosse's first national team to compete on the world stage and rising junior defender Lukas Tophoven is on Germany's national team for the second time in four years, four other Liberty representatives are assisting with the tournament in a variety of capacities, as well as sharing their faith with players and fans from around the world.

"There will be a large Liberty lacrosse presence in Israel where we are basically going to serve and reach out to the lacrosse community," said Bernardo, an MCLA Division I All-American midfielder as a junior in 2015, when he spent the summer traveling to camps as an intern with FCA Lacrosse.

The volunteers are also serving as a practice squad for various national teams preparing for tournament play and will compete in a festival against other nations' second teams at the conclusion of the world championships.

Lacrosse is the fastest-growing sport in America and the 10-day tournament — held every four years like soccer's World Cup which concludes Sunday in Russia — will feature a record 46 men's national teams.

This marks the first time since the inaugural tournament in 1967 that the World Championships will be played outside of the four primary lacrosse-playing countries of the United States, Canada, Australia, and the U.K. More than 160 games will be streamed live on ESPN+ with the semifinals and finals to be broadcast on ESPN2.

Britton is the son of Dan Britton, FCA Lacrosse's executive director of international ministry based in Kansas City, Mo., whose two daughters, Abby and Kallie Britton, played midfield for Liberty's NCAA Division I women's lacrosse team before graduating in 2016 and this past May, respectively. He is also the uncle of Caleb Britton, a rising junior attack for the Flames, and Paige Britton, who played midfield for the Lady Flames before graduating last spring.

"Dan Britton is a great resource to our program and has had a really big impact on the sport of lacrosse at Liberty in general," Flames men's lacrosse Head Coach Kyle McQuillan said, noting that he has led coaches workshops and devotions for his players.

"I am very thankful for Kyle and his staff's commitment to the Christian community," Dan Britton added. "We are trying to cast a vision and develop the culture, mission, and values for the team."

While in Israel, Zumpano hopes to strengthen Liberty's relationship with FCA Lacrosse and gain insight into how to coordinate future overseas trips involving Flames players.

"The FCA organization is a great resource wherever we go and if we can build bridges to make opportunities like this happen, that is our desire," he said, noting that a team trip to Puerto Rico set for last Christmas break was postponed after Hurricane Maria devastated the U.S. territory. "It has been on my heart and our coaches' hearts for a long time to do service trips, to not only help the game of lacrosse grow, but also to share our faith and serve other communities and be a light."

Eli Britton joined his father and sister, Abby, on an FCA Lacrosse trip to Singapore, India, and Thailand in January after Carter Britton — Caleb's brother and another former Flames attack — traveled to Ukraine and Poland last summer to conduct lacrosse clinics.

"After going to all of these different countries and working with players of different nationalities and cultures, it has kind of changed my perspective on the sport and it's honestly been a huge blessing," he said. "It's interesting to see how lacrosse crosses the language barrier. Even with all of the hostility between Russia and Ukraine, God puts us in a position where I feel safe to share the Gospel and spread the game of lacrosse." 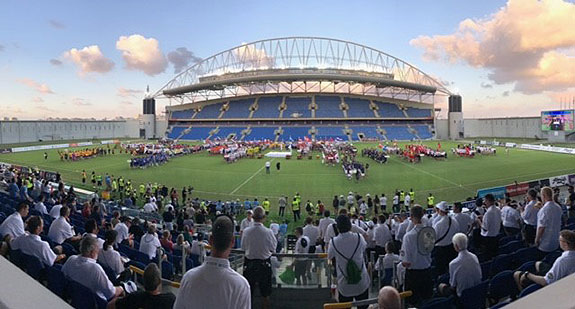