"They were the best NCAA Division II team we have played this year and it was a pretty even matchup," Lady Flames Head Coach Kaleb VanDePerre said. "Lincoln Memorial was more athletic, but not as beach experienced because they were playing indoor and beach. Tusculum was made up of all sand players and that showed in their touch on the ball and feel for the game. It was a great end to our season and way for our players to stay motivated and know what they need to work on in the offseason."

The Pioneers, who were prepping for this weekend's South Athletic Conference tournament, turned the tables on Liberty in the afternoon rematch, winning 4-1 after VanDePerre sat out his top team of Armstrong and Holbrook and bumped up his lower-seeded pairs.

"We moved everyone up a pair to mix it up, get more of a challenge, and see what would happen," VanDePerre said. "It was good for the girls to experience what that next jump would look like when the seniors graduate, and to keep us humble with the success we have had of late. It was not like we had rankings or a spot in the playoffs on the line with no league playoffs for club teams."

While the Lady Flames have concluded their season, about a dozen members of Liberty's men's beach volleyball team spent last week in the weight room before starting to practice in the sand this week. The Flames will begin tournament competition after next week's final exams, with a series of AVP events on the calendar over the summer in North Carolina, Pennsylvania, and Virginia. 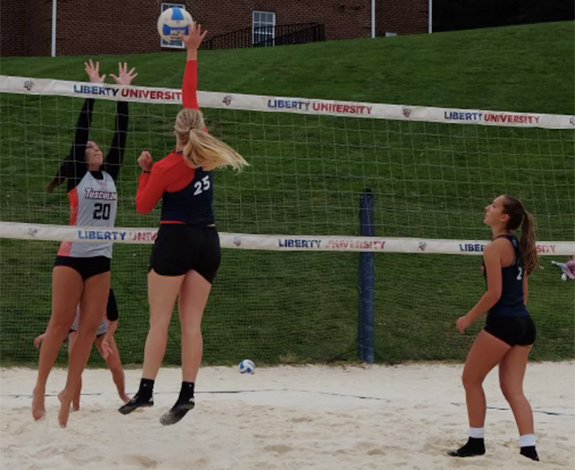