With USA Ultimate postponing its collegiate spring tournament schedule until the fall semester, after canceling the 2020 championships outright due to COVID-19, Liberty University's men's and women's ultimate teams put together contests between current team members and 16 men and 16 women alumni last weekend at the Liberty Mountain Intramural Complex.

"We weren't able to have any tournaments this semester, so it was nice to have something to work toward," Flames men's Head Coach Kevin Habermas said. "Our whole season is postponed until October, when we will have our conference championships and regional and national tournaments to finish up this season before having a normal spring season in 2022."

He said USA Ultimate is making exceptions for players who graduate this year and are still a part of the school to compete in the fall tournaments.

Liberty alumni have unlimited eligibility to return to campus and compete against the Flames and Lady Flames in contests such as those arranged by Habermas and women's ultimate Head Coach Jonathan Mast, a Liberty alumnus himself, last Saturday. Despite being outmanned, 16-11, the Flames won by a 13-9 final count before an alumnae team pulled away from the Lady Flames in a back-and-forth women's contest, 15-10.

"It was good for building relationships," Mast said. "The camaraderie on the team has been good. We have been focusing on fundamentals and theory and player development in intra-squad scrimmages, and doing some conditioning, but were delighted to have competition (from the alumnae)."

Habermas said it took a while for the Flames' men to get on track, but they responded well down the stretch.

"Playing 7-on-7 can be tough having only four subs, and it seemed like we came out nervous at first, when we had a few uncharacteristic drops," he said. "But we started getting into a groove in the second half and started executing a whole lot better."

After Mast made a diving "Callahan" interception in the Flames' own end zone for an alumni point to tie the contest at 8-8 early in the second half, Liberty's current players finished on a 5-1 run.

"We started playing more in our system in the second half," Habermas said, noting that when the alumni team shifted to a zone defense, the Flames were prepared having worked on how to attack it in the previous week's practice. "We're a really fast team, so it is tough for people to hang with us in man-to-man. We had a couple breaks in a row and got it back and scored after they were pretty much forced to go man."

While the alumni voted for junior handler Ethan Allison to be the MVP, Habermas applauded Willson for his ability to get open and make catches consistently, sophomore Joshua Duke for his defensive knockdowns, and Simmons for his all-around play.

Simmons and Willson played on the winning 4-on-4 team in a mini co-ed tournament played in the Indoor Football Practice Facility due to the threat of afternoon rain. Current senior Brianna Kuo and alumni McKenzie Ross ('19), Rayna Brandt ('11), and Kyle Canfield ('11) also played on that team in a tournament that featured 10-minute games in round robin and bracket play capped by a 15-minute final.

"That was a fun mix of all of the alumni and the current players on both the men's and women's teams," Habermas said, noting that two games were played at once using the width of the football field.

He played on the same team as his wife, alumna Krista (Johnson) Habermas ('17), Luke Byron ('18) alumnus Jenn (Vachon) Schlabach ('18), and junior Caleb Stow, which finished 2-2 in pool play before eliminating Mast's team in the first round of playoffs, 9-6. Lady Flames senior McKayla DiSarle, graduate Victoria Dissmore were among the players taking sides with Mast.

Mast was able to get his team one scrimmage against Virginia Tech on April 3, when the Lady Flames and Hokies broke up into two teams and Liberty swept both Hokies' squads and won the combined final, 7-3.

"Virginia Tech had a big squad with 30-some athletes, and we have only 17," Mast said, noting his squads only had two or three subs per team. "It was the first real time the girls had taken to the field in about a year, and it was very helpful to see where we need to develop."

Last Saturday, the Lady Flames had one more player, but not as much experience as the alumnae team they faced, and it showed in the 15-10 final.

"The alumnae team was pretty strong, with a number who have played at the club level," Mast said. "Our defense was really good, and we gave ourselves plenty of opportunities, but didn't convert as much on offense. We saw that we were more athletic than they were, but they switched up to zone defense and slowed everything down and took away the athletic factor."

Sophomore Rebekah Rupprecht, who was sidelined for a few weeks due to complications from a concussion, played in her first game back and made good decisions all around, mostly at the insert cutter or backup handler position, Mast said.

The Lady Flames will be returning the nucleus of this year's team for the fall semester, including graduate students DiSarle, a standout in the alumnae game, and Dissmore. She will be entering her sixth year on the team as USA Ultimate has extended eligibility to account for the last two postseasons being canceled by COVID-19 restrictions. The only player Liberty will be losing is Kuo, a long-time handler. 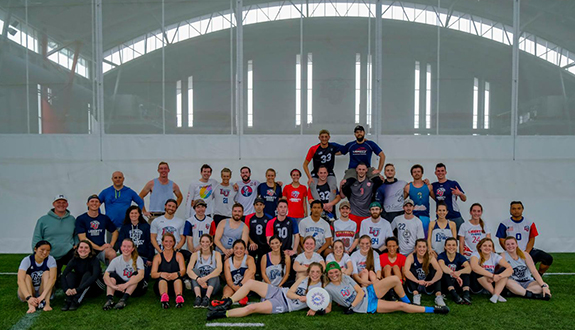 The Flames and Lady Flames pose after the event in the Liberty Indoor Football Practice Facility.