Red team players celebrate a goal in the final second of the first period of Tuesday’s championship game. (Photos by Ted Allen)

From Sunday through Tuesday, Liberty University's LaHaye Ice Center was a flurry of activity during the Liberty Hockey ID camp for U18 boys and Juniors players.

While offering campers a taste of campus life as well as honing their hockey skills, Flames coaches and players prioritized faith throughout the three-day overnight experience.

"This camp is great because not only do these kids get to come here and play the sport that they love, but more importantly we all get to grow in our faith as a community and remain centered on Christ while showing them what this university has to offer," said camp counselor and recent Flames ACHA Division I men's hockey forward Quinn Ryan, who graduated in May.

Having once been a participant in Liberty's hockey camps years ago, camp counselor and rising junior Liberty forward Zak Albers has come full circle.

"It was a great couple days. I was really excited to be able to kind of pour into those kids," he said. "My first exposure to Liberty was five years ago at the same camp."

Some of the camp's older players are entering a decision-filled season of life, one that Flames DII men's hockey Head Coach Ben Hughes knows can be difficult.

"The neatest thing about this age group is a lot of them have come up through our camps in the past," Hughes said. "We've known some of these kids for three or four plus years so it's really cool to kind of go deeper in that relationship with them personally and then, as a coaching staff, being able to be at a point in their hockey career where we can give them meaningful feedback on where they're at. We can provide a little bit of direction or advice on whether it's junior hockey or playing at a certain level of hockey and what those next steps (are). Hockey's a difficult world to navigate for some players and parents, so just to have a resource available like us, we just try to be there for them."

"It's very confusing sometimes and you can get lost," Albers added. "It's cool to be able to come in alongside of them and coach them through it and just encourage them."

During each of the three days of camp, amidst on ice games and drills on and off the ice, participants attended chapel sessions led by Division III Head Coach Josh Graham. He reminded the players to look to the Lord now while understanding that we are called to a life of surrender.

"God meets us exactly where we're at," Graham said. "Where God fits in your life is going to dictate what you do in life."

Having godly examples to look up to is something that Hughes and the rest of the Liberty Hockey staff value for their young campers.

"I know for me the camps I went to and the counselors that you look up to really last a long time in your mind … and being able to have that Christ-like example of these (Flames players serving as counselors) that are there for these younger campers but are really good hockey players, too, has made a really big impact on some of these guys," Hughes said.

This coming Sunday through Tuesday, the fourth and final session of Liberty's Summer Hockey School will be a Girls Camp directed by Lady Flames ACHA DI women's Head Coach Chris Lowes for Mite, Squirt, Pee Wee, Bantam, U16, and U18 players. 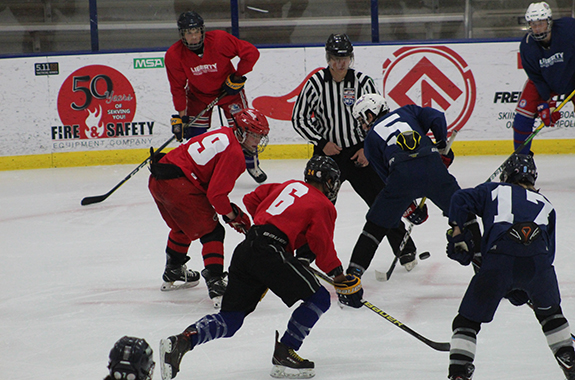