Senior forward Danica Polson scored the second goal and was Liberty’s Player of the Game. (Photos by Jenna McKenney)

The Lady Flames (18-1, 14-1 ACHA) came out firing in the first period, netting two goals against the Warriors (18-9-2) on high-quality scoring chances in the opening 1 minute, 12 seconds.

Seconds after graduate forward Val Manchak drew a penalty, senior forward and head captain Shannon Fehr capitalized before the refs blew the whistle by skating the puck into the right circle and lifting a wrist shot into the top left corner of the cage, beating Midland goalie Hannah Stone glove-side for a 1-0 lead just 40 seconds after the opening faceoff.

"It was an incredible start by our team," Liberty Head Coach Chris Lowes said. "That's just a snipe of a shot by Shannon to get us started. She's done that plenty of times during her career and it was nice to see her finish that one there."

The penalty before Fehr's goal left Liberty on the power play and it capitalized 32 seconds later when freshman forward Brityn Fussy released a shot from the top of the left circle, triggering a flurry of activity in front of the cage. Sophomore forward Yannick Truter tipped the puck to Shelby Bradford on the left endline, where she skated in and sent a pass across to fellow senior forward Danica Polson for a point-blank finish in the right crease, doubling the lead to 2-0 at the 18:48 mark.

"It was nice to get a power play goal early," Lowes said. "That was encouraging, and it looked like we might break it open there, but they tightened it up and played solid defensively."

The Warriors nearly cut the deficit in half with 4:18 left in the second period when a pass behind the cage to freshman defenseman Priscilla Ziefle bounced off her skate directly to Midland forward Ally Rakowski in the left crease. However, her shot struck the left post as Lady Flames freshman goalie Amanda Storey retreated to her position between the pipes.

Senior forward Alex Smibert nearly extended Liberty's lead on the other end before Truter narrowly missed with her shot in the left circle moments later.

The Lady Flames' 2-0 lead stood until the 3:55 mark of the third period when Warriors forward Mackenzie Bertolas stole the puck from Fussy along the boards near the top of Liberty's left circle and sent a pass across to linemate Kayla Flanigan who ripped a shot from the inside edge of the right circle past Storey stick-side, making it a one-goal game.

"We had that turnover at the end and they made us pay, and we had to weather the storm," Lowes said. "Both teams had power play opportunities and both goalies made the saves they needed to."

Manchak nearly netted an insurance goal in the closing 2:00 after skating the puck from the red line and maneuvering between two Midland players before penetrating into the left crease, where her shot was stuffed by Stone.

Liberty outshot Midland by a 37-19 count and Storey made 18 saves in net for the Lady Flames.

The one-goal win after opening a two-goal lead in the first 72 seconds didn't surprise Lowes, even after the Lady Flames had shut out the Warriors by 3-0 scores twice during the regular season.

"The national tournament hasn't disappointed," Lowes said.  "In the regular season, we have seen some blowouts, but this game and the other semifinal were both close as teams have raised their games for the playoffs and paid greater attention to detail."

Fourth-seeded Lindenwood (15-7-1) is the only ACHA team to defeat Liberty in the past two seasons — twice last year and once in the Jan. 23 regular-season opener at the LaHaye Ice Center, where the Lady Flames were shut out for the first time in seven seasons.

The Lady Lions blanked second-seeded host Minot State, 3-0, in Sunday's other semifinal game. Liberty opened national tournament pool play with a 4-0 win over Lindenwood on Thursday, when Storey recorded her first shutout of the year.

"We caught most of the Lindenwood-Minot State matchup and it was a pretty impressive game," Lowes said. "Lindenwood looked better than they have all week. Both teams will look different than they did in Game 1, playing with more confidence, and the adrenaline and energy of the moment will take over."

After playing in the 5 p.m. EST slot for the first four games of the tournament, the Lady Flames will have a few more hours of recovery time before they take the ice for the 8 p.m. EST championship final puck drop. They will look to match Lindenwood's ACHA DI women's record of four national titles, including three in a row, a feat the Lady Lions accomplished from 2008-10.

"I am excited for and confident in our girls," Lowes said. "It will be an opportunity to go do something special here (on Monday night). It will be a matter of which team performs and executes the best. We have put the work in, now it comes down to one game and we've got to lay it all on the line."

Complete tournament results and schedule are available on the ACHA website and all games in the four divisions of the ACHA National Championships (DI women and DI, II, and III men) are being webcast live by Hockey TV, which requires a subscription. 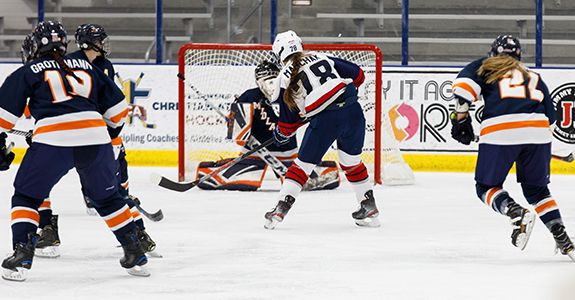 Graduate forward Val Manchak closes in on the Warriors' cage in a game last season at Liberty.