Luke Heimann will bring positive energy to Liberty this fall, as he did at New Hampshire. (Photos courtesy of Lex Thompson)

"My sister was a figure skater who skated professionally in Germany and my brother is a retired junior hockey player, who played mostly out West in Oregon, Montana, and here in California," Heimann said. "He was the first one to put me on skates and taught me everything about hockey from a very young age. Even now, he is my biggest critic, in a good way."

Heimann will be reunited with a childhood friend, incoming forward recruit Jackson Vercellano, who he trained with under a mutual skills coach and whose families frequently went to the beaches of Southern California together.

Before spending the past two seasons with the Monarchs, the 5-foot, 11-inch, 185-pound defenseman played for the Los Angeles Junior Kings 18-under AAA team, scoring six goals and distributing nine assists his third season in 2018-19.

"Playing hockey in Los Angeles, it doesn't get better than that," Heimann said. "I had my ups and downs in Juniors hockey, but I learned a lot and wouldn't trade it for anything. Not only are you playing at a higher level, but the ability to focus on hockey 24/7 (in the NCDC), allowed me to improve my game."

Flames Head Coach Kirk Handy said Heimann made a positive first impression when he visited campus on March 19, on the way back to New Hampshire after playing 20 games in 40 days in a USPHL bubble at AdventHealth Center Ice in Wesley Chapel, Fla.

"He is a guy who is really excited to be a part of our program, someone who values the hard work and the compete level needed to make our program the best it can be," Handy said, noting that he is a right-handed defensemen, a rarity at Liberty, which currently has eight left-handers in its defensive corps. "He wants to be here, wants to come in and compete, and that kind of contagious spirit is great to have."

Heimann, who will have an opportunity to showcase his skills on the ice at the May 20-21 Flames Prospect Camp, will fill an immediate need with Liberty graduating five to six senior defensemen in May.

"He is going to be a real steady defenseman for us, someone who fits the culture at Liberty and what we're looking to do here," Handy said.

Heimann considers himself a physical player with a solid two-way game.

"I like to play my role and stick to it, to provide solid defense as well as producing offensively," he said. "I love to battle and go at it with my teammates in practice, and I am excited for that."

He said the LaHaye Ice Center is a nicer facility than a lot of NCAA Division I programs have to offer and is significantly better than most NCAA DIII programs' rinks.

"I love the environment and everything about (life at Liberty)," Heimann said. "I am looking forward to starting the academic up and contributing to the culture as well."

The son of a doctor and a nurse, who met at a hospital in California, Heimann plans to major in exercise science at Liberty with a physical therapy focus.

"I love the idea of medical school and I am motivated by my father, who is an anesthesiologist, after watching a bunch of his procedures," Heimann said.

Besides ice and roller hockey and golf, which he has picked up the past three years, Heimann's biggest passion is physical training, maintaining his health through diet and exercise, in preparation for the next hockey season.

"I am looking forward to working with (Club Sports Strength & Conditioning Coordinator) Coach (Chris) Kerr," he said. "I just started skating again this week and will work over the summer with my skills coach here in California with a little extra motivation now that I'm going into college." 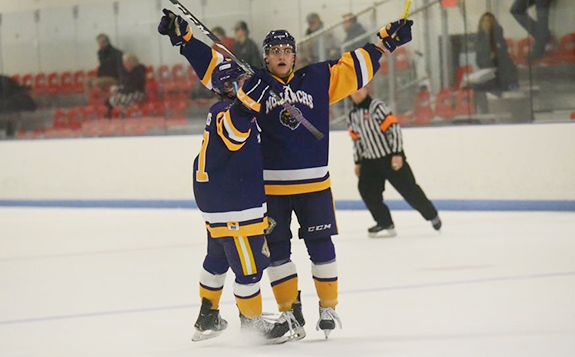 Heimann celebrates a goal near the blue line with a New Hampshire Junior Monarchs teammate.