Gymnasts Bouton, Johnson post 1-2 All Around finish at JMU

Junior Julie Bouton leaps on the balance beam in Liberty’s practice facility in The Plaza. (Photo by Kevin Manguiob)

Liberty University's men's and women's gymnastics teams traveled to their second competition in as many weekends, Saturday at James Madison University, where Julie Bouton and McKella Johnson again finished first and second, respectively, in the All Around.

The junior gymnasts paced the Lady Flames to a runner-up team showing behind only Penn State and ahead of third-place JMU, as well as Eastern Michigan, Christopher Newport, Navy, Temple, Towson, Virginia, and West Chester.

"Our top two girls had another great weekend," Liberty Head Coach Tim Kappel said after Bouton finished first in the vault and balance beam, third on the uneven bars, and fourth in the floor exercise and Johnson won the bars and placed second on the vault and beam. "The freshmen are still adjusting and will find some better consistency with time."

"The men were up against one of the best teams in the country (Penn State) and kept up well," Kappel said.

The Flames and Lady Flames will compete again in March at a meet to be determined before sending their complete team to the April 13-14 National Association of Intercollegiate Gymnastics Clubs (NAIGC) national championships in Ft. Worth, Texas. 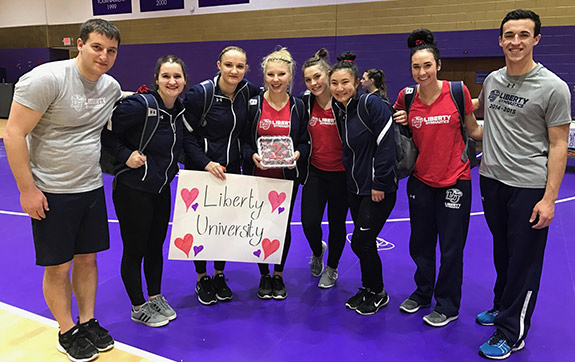