The Gators, who arrived a half hour after the projected start time following an 18-hour bus trip from Gainesville, Fla., kept the Flames and a crowd of more than 4,000 thousand fans — which wrapped around all four sides of the field — waiting for the late-night-approved event that turned into a blowout.

"It was unfortunate, but the best part was the fans were all here and they were ready to go and nobody left and that was what really helped us come out and score nine goals in the first quarter," Liberty Head Coach Kyle McQuillan said. "We kind of made a statement pretty early and took Florida out of it right off the bat, which is good. We want to do that in every game. Tonight, the crowd was responsible for that surge at the beginning of the game, which was great."

The Flames (6-3) could relate to the late-arriving Gators after bus troubles en route to Blacksburg, Va., forced a 45-minute delay to the start of their regular-season-ending game at Virginia Tech last April 17. After rushed warmups, Liberty trailed 13-4 by halftime in a 15-7 setback on the Hokies' senior night.

Florida (6-4) fell behind 9-0 after the first quarter and 14-0 at the half, when it managed only three shots against Flames starting goalie Matt Nichols.

"You feel bad," McQuillan said. "I wouldn't want to be in a situation where you have to come out and respond that quickly, but it was a perfect storm. Coming off the bus and walking into a couple thousand Liberty fans, I think they were dead in the water. Give our guys credit, they took advantage of it and they made the night theirs. Our guys were really ready tonight and it really didn't matter who we played, I think we would have had a lot of success. It was a game that was important to us and we came out and did what we needed to do."

Freshman attack Sam Gregory ignited the Flames by netting the game's first two goals in the opening two minutes, the first off a fast-break feed from Mrakovich, who penetrated and finished the third score from the left side moments later. Sophomore attack Nick Lombardozzi then capped a transition passing sequence sparked by freshman long-stick middie Win McKeever's steal at midfield for a 4-0 lead before McKeever picked up a ground ball off a faceoff won by senior Charles Fianko (11 for 12 on faceoffs) and helped set up Miller to make it 5-0 with the Flames on a man advantage.

"Win probably led the team in ground balls today," McQuillan said. "He was great in transition. We had four or five and sometimes even six guys in transition moving the ball really well. Tonight, it's one of those situations where it's easy to be selfish with the ball, with the crowd and the response you get with a big move or a big shot. But I actually felt the guys played very unselfish, probably one of the most unselfish games we've seen all season. We were really focused on getting the ball around, creating opportunities, moving the defense, and that resulted in our success, especially early in the game."

Sam King put away a point-blank shot off a short feed for a 6-0 lead with 6:07 left in the first quarter before Miller netted his second score and senior midfielder Brett Bernardo scored off Lombardozzi's assist from behind the cage. King later fed fellow sophomore midfielder Morgan Pitts, who rifled in a shot from the top left side of the box for a commanding 9-0 advantage.

Valentine started the second-quarter scoring with a shot into the upper netting off an assist from Mrakovich to make it 10-0. After junior Chad Moore capitalized off an assist from Bernardo, Valentine closed out the first half with three unanswered goals.

"Nick Valentine's been a guy we've been able to put in different situations coming off the bench, but today he had six goals, which was impressive," McQuillan said. "We had scoring from a lot of different guys. It was a good opportunity to be able to get everybody in and to give them an opportunity to show us what they've got."

Liberty concludes its regular season with games against SELC Northwest Region rivals Tennessee next Saturday in Knoxville, Tenn., and Virginia Tech the following Friday, when the Flames will seek to stretch their home winning streak to 23 games on their senior night.

"A victory at Tennessee will lock up an (SELC) playoff spot and make that Virginia Tech game that much more important," McQuillan said, noting the in-state showdown would determine not only the Northwest Region's regular-season champion, but also its top two seeds for the SELC tournament. 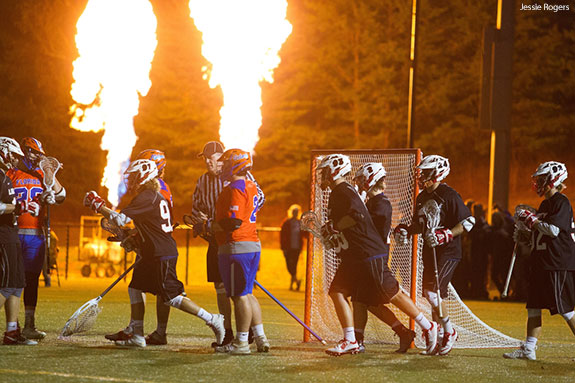 With flamethrowers burning, Liberty celebrates a goal against Florida in the 'Midnight Mayhem' game.