Beth Frackleton is cradled by her triathletes at their open water practice facility at Ivy Lake in nearby Forest, Va., in 2009.

As the founding head coach of Liberty University’s men’s and women’s triathlon teams from 2009-2014, Beth Frackleton paved the way for the Flames and Lady Flames to contend against other club and even NCAA Division I triathletes from across the country.

Frackleton, who will be inducted into the seventh class of Liberty’s Club Sports Hall of Fame on Saturday at noon at The Virginian Hotel in Downtown Lynchburg, Va., brought in some elite recruits who made the program competitive in its first five seasons at the regional and national levels.

“We were able to travel all over the country — to Texas, Arizona, and Alabama,” Frackleton said.

Paced by Joseph Anderson, Parker Spencer, and Scott Fritz — who later became Frackleton’s assistant coach from 2012-14 and will be introducing her on Saturday — the Flames’ men’s team placed 19th out of 120 programs at the USA Triathlon Collegiate National Championships, held April 21, 2012, in Tuscaloosa, Ala.

“To this day, when I reflect back on that, I think, ‘Wow,’ because our guys were competing against the best athletes all those schools had,” Frackleton said, noting men’s triathlon is still not an NCAA Division I sport. “We just had name recognition out there early on and that was so fun to watch. To see those young athletes become mature adults, to grow as athletes and grow as people while keeping their faith throughout the process, it certainly helped to strengthen mine.”

Frackleton became a Level-1 certified coach after entering her first triathlon in the early 2000s and finished her first Ironman in August 2009 in Louisville, Ky., days before debuting as Liberty’s first coach. She recalled proposing the idea of forming a club sports program that previous spring.

“I just went over and shared that I love triathlon and I’m certified as a coach, trying to sell it as a Club Sport,” Frackleton said. “I said, ‘t’s a popular sport, and it is growing, and I would love to see if there’s enough interest here.’ We had one meeting that spring and the few that did come out did their best to recruit others, and we started out from scratch, running and getting in the pool and swimming. Not everybody had a bike.”

She guided the Flames and Lady Flames to second- and third-place finishes, respectively, in the Mid-Atlantic Conference Regional standings in October 2012 before traveling with Anderson and Spencer to represent Liberty and the United States in the 2012 World Age Group Triathlon Championships in Auckland, New Zealand.

Since relinquishing her head coaching responsibilities to Spencer in 2014, Frackleton has joined the University of Virginia’s health system as a health and wellness coach and counselor.

“I got National Board Certified as a Health & Wellness counselor and coach,” said Frackleton, who received her B.S. in nursing from Virginia in 2006 and a B.S. in health sciences and MEd in counseling from the University of Lynchburg. “This job (at UVA) has been a great fit because it has allowed me to use my nursing background, counseling background, and personal trainer background all in one position — working with people one-on-one to help them make positive lifestyle changes.”

She has fond memories of her time as head coach, including working with Anderson to host the first collegiate race on campus, the Liberty Collegiate Triathlon, in September 2013.

“The trips that we took, the camaraderie, and just the love of competing and growing as athletes were the greatest experiences,” Frackleton said. “As a coach, you want your team to do well, but at the same time, it was more than that. It was watching these young people improve as they move along every year, and accepting when things didn’t always go as planned, which was always a life lesson.”

She said it took a special job offer to take her away from Liberty and coaching one of the fastest-growing sports in the United States, and at the collegiate level on the Flames’ campus.

“I felt like I was at a time in my life where, as a leader, I had other things to do and could pass the baton over to someone who could take this to the next level,” said Frackleton, who has stayed active in triathlon on a recreational level and as former vice president of the Charlottesville Triathlon Club. “That was fun and it helped me to get connected in the community. After five years, I passed that title on, but have still remained involved and still train for triathlons and I love it.” 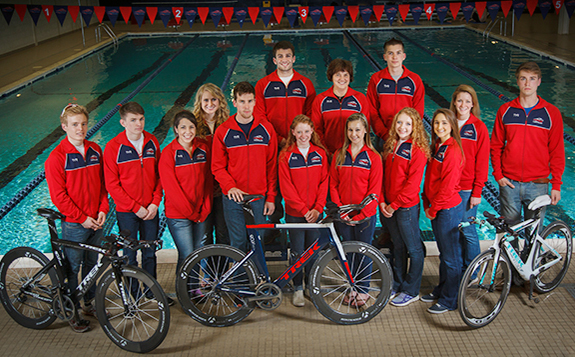